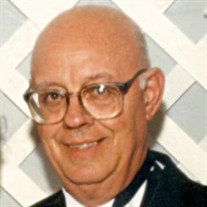 William “Bill” J. Valencia, Jr, 82, of Pueblo passed away Oct 8, 2016 surrounded by his loving family. Preceded in death by his parents, William & Flossie Valencia, Sr.; brothers, Dannie Valencia and Dale Valencia; and sister, Clarabel Patrick. Survived by his wife of 56 years, Phyllis Valencia; children, Kenneth Valencia, Greg Valencia, and Lori Valencia; grandchild, Kyle Joseph Valencia; sisters Rosalie Martin, and Kathleen (Earnest) Conley; numerous nieces, nephews and extended family. William was born and raised in Pueblo. He graduated from Centennial High School, class of 1952 where he was affectionately known as “Lippey”. William was in the US Navy Reserve from 1955 to 1960 during the Korean conflict and was stationed in Guam. William honored his flag and was proud to serve his country. He then went on to complete a newspaper printing apprenticeship in 1960 and worked for the Star Journal & Pueblo Chieftain where he retired after 43 years of service. William was an avid golfer and enjoyed playing various golf courses wherever he traveled, watching the Broncos, family gatherings, loved the outdoors, and spending time at the family cabin in San Isabel, coffee with his Chieftain buddies, enjoyed his pride and joy grandson, Kyle Joseph, and always enjoyed a good meal. Funeral Service will be held 10:00 am, Thursday, October 13, 2016 at St. Joseph Church. Entombment to follow at Roselawn Cemetery.

The family of William "Bill" Valencia created this Life Tributes page to make it easy to share your memories.

Send flowers to the Valencia family.