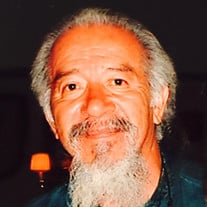 Walter James “Jim” Gonzales, 75, passed away unexpectedly on Aug. 20, 2015. Jim lived most of his life in Pueblo. He was a graduate of Pueblo Catholic High and served in the U.S. Army as a Green Beret in the 101st Airborne Division. As a gifted athlete, he received numerous awards and recognition – hundreds over his lifetime. He played fast-pitch softball, ran track and field, as well as participated in numerous running events over the years through the current time including dozens of endurance races. Jim was inducted into the Mexican-American Sports Hall of Fame for his many accomplishments in weightlifting. He was extremely vibrant and active having walked and run with his beloved dogs, Shiva and Kan, several miles a day until the time of his death. Jim earned Bachelor’s and Master’s degrees in K-12, P.E. and Special Education. He served as a special education teacher to the most severely physically and mentally disabled children, predominantly at Pitts Middle School, Pueblo East High School and throughout Colorado in other school districts. He was a rare combination of physical strength, intellect, artistic talent, genuine compassion and generosity. Jim would share a story; play a song on the trumpet, offer encouragement and share wisdom to anyone who was in need. He was curious and always engaged in learning and growing as a person. His later years were simple yet vast in the impact of his daily kindness and presence. He met obstacles with optimism and courage - he never gave up and showed others a path to healing through his spiritual nature and being. Family love and care were paramount to Jim. He enjoyed spending time with each of his children and was so proud to become a grandfather. He was delighted in the happiness of his family and the people they became, always holding them in the light of his love, no matter the distance or time apart. He looked forward to sharing a meal, going for a walk/run, talking on the phone, sharing a sweet treat and being in the company of his kids. Jim loved his parents, brothers and sisters dearly. He had many joyous memories of adventures and time spent together. While he was humble and could be perceived as having a quiet nature, Jim loved to spend time in conversation with others and had a very playful sense of humor – not to mention a great dance. He could find connection with people from all walks of life. He has returned to the light and will live on in the memory and good works of those who were touched by his life of service and gentle spirit.

The family of Walter "Jim" Gonzales created this Life Tributes page to make it easy to share your memories.

Send flowers to the Gonzales family.