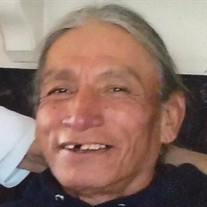 Thomas Douglas Long Wolf was born on October 8, 1962 in Oglala, SD to Antoine Long wolf and Lucy Red Paint-Long Wolf. Thomas made his journey to the Spirit World on January 2, 2020 at his home in Pueblo, CO. Thomas is survived by his longtime... View Obituary & Service Information

The family of Thomas Douglas Long Wolf created this Life Tributes page to make it easy to share your memories.