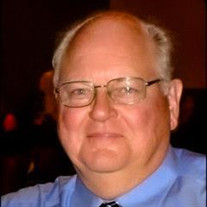 Thomas R. Garnett, 76, died December 29th, 2020. Survived by wife, Kathryn J. Garnett; children, Jonthan (Carissa) Garnett, and Michael (Barbie) Garnett; grandchildren, Tatum Garnett, Finn Garnett, and Oliver Garnett; brothers, John (Gloria) Garnett, and James Garnett; sister, Jane Garnett; brother-in-law, Gabriel Gradisar; sister-in-law, Doris Garnett. Preceded in death by brothers, Bob Garnett and Ray Garnett; sister, Mary Gradisar; and parents Raymond and Helen Garnett. Thomas was a soul mate to wife Kathryn. They were high-school sweethearts and married on February 19th, 1966. They celebrated their 54th anniversary in 2020. He was an inspiration to sons Jonthan, and Michael, and a loving grandfather to Tatum, Finn, and Oliver. Thomas was a member of the Christian Brotherhood, and served as a Hospital Corpsman in the US Navy during Vietnam. His mission in life after returning from the military was to get an education and raise a family. Thomas graduated from Southern Colorado State College with a Behavioral Science degree, and began a successful career as a Probation Officer for the 10th Judicial District where he retired after 28 years. Thomas was an avid member of the Pueblo community, coaching PSSA Soccer Teams, and was involved in the local 4-H program as an instructor and Judge. He was truly a role model for the youth of the community. Thomas enjoyed the outdoors, especially fishing and camping, was a beekeeper, and enjoyed photography. He lived for God and spent his days looking forward rather than back. He was loved, and will be missed by many. At Thomas’s request, there will be no services. Online condolences can be made at roselawnpueblo.org.

The family of Thomas Richard Garnett created this Life Tributes page to make it easy to share your memories.

Send flowers to the Garnett family.