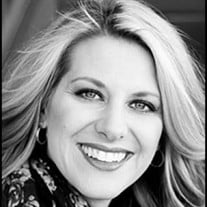 Taneisha L’ayne Schumann (Pechek) passed peacefully surrounded by family on September 17, 2019 after a yearlong battle with lung cancer. Born January 26, 1982 in Enid, OK to Wayne and Lori (August) Pechek. She married the love of her life, Ryan, on July 18, 2009 and they went on to have three beautiful children; Cline (8), Colbie (6), and Cael (3). A graduate of Central High School in 2000, Taneisha was a star tennis player, student body president, and homecoming queen. She continued her education with bachelor’s degree in English from the University of Northern Colorado and a master’s degree in Special Education from the University of Arizona. While at UNC, Taneisha was a member of the Bears tennis team. Her teaching career began at Cherokee Trail High School in Aurora, CO as a special education teacher focusing her efforts on children with severe needs. Her dedication to this student population was recognized by the Cherry Creek School District in 2012 with the prestigious Golden Heart Award. The following year, Taneisha and Ryan moved back to Pueblo where they continued their teaching and coaching careers at Pueblo West High School. Taneisha moved to Cedar Ridge Elementary in 2018 to teach the 5th grade. The most notable portion of Taneisha’s teaching career was implementing the unified Prom and unified sports teams at PWHS and throughout the city. She was instrumental in expanding the access her students had to the Special Olympics and life skills program at the high school level. Taneisha’s mission was for full inclusion at all levels, and her passion left a lasting impact on many of her students and their families. Taneisha and Ryan were humbled by the outpouring of love and support of those near and far. The building of Team Taneisha was a true demonstration of the impact she had on so many lives. Among the thousands to thank, there are a few special people she wanted to thank individually: UCHealth and Dr. Ross Camidge, the office of Dr. Steve Vialpando, Sangre de Cristo Hospice House, Dorcy Cancer Center, Pueblo School District 70, staff of Cedar Ridge Elementary, staff of Pueblo West High School, and the Kirkland family. From a young age, Taneisha was a loving and caring spirit who always wanted others to be happy. Her optimism, smile, and love of life were infectious, and her very presence encouraged others to be better versions of themselves; to always see the joy in life. Her empathetic charm made everyone feel welcomed and included. Taneisha will always be remembered for being adventurous, her thoughtfulness, loving life, and her award-winning smile. Taneisha was an exceptional wife, daughter, sister, auntie, teacher, and friend, but first and foremost, she was a dedicated mother. She treasured her children and embraced every moment with them. Taneisha’s love, kindness and compassion will be carried on through her children. Taneisha is survived by her husband, Ryan, and three children: Cline, Colbie, and Cael; her parents Wayne and Lori (August) Pechek; older brother Ty (Lindsay) Pechek; and younger brother Tony (Katie) Pechek; and nieces Tori Pechek, Lexi Pechek, Maggie Pechek, and Claire Pechek, all of Pueblo, CO. Taneisha is also survived by Ryan’s family: Roger and Anelle Schumann of Hot Springs Village, AR; Ryan’s older brother Roger (Shauna) Schumann of Idaho Falls, ID; Ryan’s older sister Ronda (Todd) McCullough of Minden, NV; nieces and nephews Drew (Sara) Schumann, Kirsa (Trevor) Holzmeister, Noah Schumann, Garrett Ill, Dylan McCullough, Isaiah Schumann, Corrigan Ill, and Brooke McCullough; and Ryan’s grandmother Hilda Schumann of Hot Springs Village, AR. Taneisha is also survived by many loving aunts, uncles, cousins, and close friends. Taneisha is preceded in death by her grandparents Robert and Mary (Yoxey) Pechek; Louis and Idamae (Krasovec) August; Ryan’s grandparents George Roger, Jr. Schumann; and Dorothy and Morris Vicnair. She is also preceded in death by her niece, Kirstin Pechek of Pueblo, CO. A dedicated Auntie, Taneisha mentioned in her final weeks that she would be with, and take care of, baby Kirstin. Taneisha was laid to rest in a private burial ceremony at Roselawn Cemetery. We welcome family, friends, and community members to join us in a Celebration of Life ceremony on Saturday, September 28 at 2:00 p.m. at Pueblo West High School. Everyone is encouraged to wear their Team Taneisha shirts, white for lung cancer awareness or Taneisha’s favorite color, yellow. In lieu of flowers, Taneisha has requested for school supplies to be collected and donated to local schools. Donations will be collected at the Celebration of Life ceremony. Monetary donations for Cline, Colbie, and Cael’s future education expenses can be made to payable to Ryan Schumann and mailed to: Team Taneisha, PO Box 9767, Pueblo, CO 81008.

Taneisha L&#8217;ayne Schumann (Pechek) passed peacefully surrounded by family on September 17, 2019 after a yearlong battle with lung cancer. Born January 26, 1982 in Enid, OK to Wayne and Lori (August) Pechek. She married the love of her life,... View Obituary & Service Information

The family of Taneisha L'ayne Schumann (Pachek) created this Life Tributes page to make it easy to share your memories.