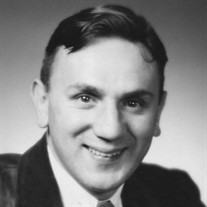 Steven Zenos, 94 of Pueblo, CO, born Jan 29, 1925 in Binghamton, New York passed away Aug 21, 2019. Preceded in death by father, Anthony Xenopolis and mother, Christine Chalikas; sisters, Jenny Zenos and Helen Funk. Survived by his wife, Margaret Donchuk Zenos; children, Christine, Andrea, Valerie, and Anthony; grandchildren, Adam, Janah, and Aria. Steven joined the US Army Air Corps in 1943, immediately after graduating from North High School in Binghamton, NY. He received extensive education through the military and completed two engineering degrees at Rensselaer Polytechnic Institute in 1948. He had a 33-year career with IBM in tech sales, working with NORAD, NASA, Los Alamos Labs, and other large technology programs of the federal government. He and his wife of 70 years, Margaret, retired in 1984 and settled permanently in Pueblo, CO in 1995. During his long life, he was active in St. George Greek Orthodox Church in Albuquerque and St. John the Baptist Greek Orthodox Church in Pueblo. Visitation will be 2:00pm, Sunday, Aug 25, 2019 at Roselawn Funeral Home Chapel. Funeral Service will be 10:00 am, Mon, Aug 26, 2019 at St. John the Baptist Greek Orthodox Church. Interment to follow at Roselawn Cemetery. Memorial contributions can be made to St. John the Baptist Greek Orthodox Church. Online condolences can be made at roselawnpueblo.org.

The family of Steven Zenos created this Life Tributes page to make it easy to share your memories.

Send flowers to the Zenos family.