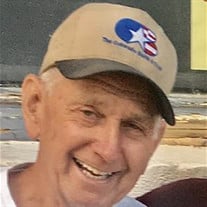 Stephen Edward Foreman was born in West Fork, Arkansas in 1940 and passed away on April 16th 2022 at the age of 81 in Pueblo, Colorado. Eddie is survived by his wife of 62 years Mary Eva and his three children Collette Foreman, Shelly (Lad) Sullivan, Stephen Edward (Amy) Foreman II. He is also survived by his two grandchildren Gentry O’Leary Sullivan age 20 and Stephen Edward Foreman III age 5 months. He is proceeded in death by his Mother Christine Grace Brown, Bonnie Phillips (sister), Bill (brother) and Molly (sister). Eddie’s childhood was spent between Arkansas and Ojo Caliente, New Mexico. He moved to Pueblo Colorado at a young age and spent the rest of his life here. His stories of growing up are plentiful, funny and historical. Eddie fell in love with Mary Eva after seeing her on Main Street, “Dragging Main” and they married in 1960. It was a beautiful marriage lasting more than 62 years. They lived in Pueblo County their entire lives. He took great pride in his home and yard, winning many yards of the year awards from both Pueblo County and the City of Pueblo. Eddie decided to open his own business “Foreman Floor Covering” 40 + years ago, when his strong hand shake was a showing of confidence and honesty. Dad was an exceptional tradesman and contractor. One day while on the job Eddie as rapidly doing his usual beautiful work, the superintendent said “You can slow down, Eddie; Rome was not built in a day.” Eddie responded. “That is because I was not on that job.” Eddie took great pride in providing good work to all of his customers. He literally had fun laying every floor, tiling every wall and covering every counter top. Eddie enjoyed fishing and hunting. In 1981 Eddie won an award from the department of Alaska fish and game for catching a 213 pound Halibut. He was a master marksman hunter; he never missed a targeted shot. He went on many a hunting trip in Colorado and Alaska. Eddie Foreman was a genius Artisan. He designed, created, and built with his own hands a mountain home (cabin) at the foot hills of Colorado. He had the fortitude to continue building this home for 30 + years. Dad’s innate intelligence superseded any class in engineering. The cabin’s blueprints were drawn on many napkins over breakfast at diners around Pueblo. The physical strength Dad had to build his mountain home was astonishing. Eddie not only built his Mountain Home, he also built all of the furniture to put in it. He loved going to his favorite shopping place “The Dump” acquiring many treasures to repurpose and make into new and useful chairs, tables, and swings. These creations of great artistry make his homes both extremely unique and visibly beautiful. Dad had a love for perusing car lots and surprising his wife Mary Eva with a new set of wheels on a regular basis while Mary Eva rolled her eyes. Eddie loved listening to Country music of the 40’s, 50’s and 60’s. He always said there was a lot of meaning in the words of the songs. Dad could dance like a dream. He loved visiting with his many friends over coffee. Upon meeting with a stranger by the end of the conversation they would become Eddie’s friend. Eddie fought like hell to stay alive; he did not want to die. God had other plans for him. Dad had a Heart of Gold. He is dearly loved by his family and everyone whose lives he touched. He will be forever in our hearts and will always be missed. “Eddie Foreman lived his life his way” he said, “Always have something to be excited about and to look forward to.” A special thanks to all of Eddie’s friends that visited him throughout his life and while he was in the hospital. Private Services Pending.

Stephen Edward Foreman was born in West Fork, Arkansas in 1940 and passed away on April 16th 2022 at the age of 81 in Pueblo, Colorado. Eddie is survived by his wife of 62 years Mary Eva and his three children Collette Foreman, Shelly (Lad)... View Obituary & Service Information

The family of Stephen Edward Foreman created this Life Tributes page to make it easy to share your memories.

Stephen Edward Foreman was born in West Fork, Arkansas in 1940...

Send flowers to the Foreman family.