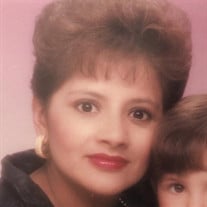 Sandra Kay “Sandy” Comfort died September 13th, 2018 at home after a long illness. She was born December 11, 1958 and raised in Trinidad Colorado, one of eight children to Natalio and Frances Rivas. She played clarinet and was a majorette at Trinidad High School, class of 1977. Sandy pursued different professions over the years, including her work as an EMT, a Sheriff dispatcher and a teaching aide for English Language learners. But the title that shaped her life the greatest, was that of mother. She prided herself on being the loudest fan in the stands cheering her children on through sports over the years. She adored her grandchildren, and caring for them and spending time with them gave her the greatest joy. She was never intimidated by adversity. When she was diagnosed with lupus and rheumatoid arthritis at 33, she fought them head on with her characteristic determination and fierce opposition. Sandy treated arguing as a sport, and she never lost. She will be greatly missed by her family, as they will now have to make their own calls for everything from doctor’s appointments, to contract negotiations. She is survived by her husband, Jeff; children, Brandan (Lani), Brian (Stacey) and Jessica (Scott); as well as her grandchildren, Braylee, Betty, Madelyn and Lillian; siblings, Jesse Rivas, Frances Ratzall and Sheila Rivas. Preceded in death by her parents; and siblings, Matilda, Carmen, Gary and Ricardo; as well as by her beloved dog, Kirra- whom she is carrying around in heaven. Funeral Service will be held to honor Sandy at 10:00am, Wednesday, September 26, 2018 at St. Joseph Catholic Church 1145 S Aspen Road. Interment to follow at Roselawn Cemetery. In lieu of flowers, please make a donation to the ASPCA.

Sandra Kay &#8220;Sandy&#8221; Comfort died September 13th, 2018 at home after a long illness. She was born December 11, 1958 and raised in Trinidad Colorado, one of eight children to Natalio and Frances Rivas. She played clarinet and was a... View Obituary & Service Information

The family of Sandra Kay "Sandy" Comfort created this Life Tributes page to make it easy to share your memories.

Send flowers to the Comfort family.