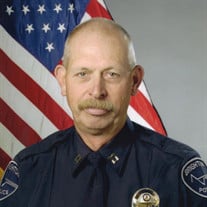 Robert D. White, 75 of Pueblo passed away and joined his beloved Sandy on July 14th 2020. Survived by their 4 daughters, Catherine (Todd) Heller, Shannon (Duffy) Murphy, Leisa Francis and Cynde Layman; 11 grandchildren; and 6 great grandchildren; and a sister, Patricia (Dudley) Davis. Besides his lovely wife, Sandra J. White, he was proceeded in death by his parents, Daryl and Barbara White; and his great granddaughter, Ivory Jean. Bob served in the Coast Guard as Second Commander with medals for Good Conduct and National Defense. He began his career in the police force serving on the Hawthorne P.D. in California. Moving back to his beloved Colorado, he joined the Jefferson County Sheriff’s Department rising to the rank of Lieutenant. In 1988, he began his career with the Brighton Police Department retiring from there in 2013 as Captain and Assistant Chief of Police. He was well respected by the entire Metro area earning the respected name of “Maximum Bob” for his firm disciplinary actions with officers of the Patrol and Detective Divisions. Outside of law enforcement, Bob loved to fish, hunt, golf and play poker. He was a devoted father, a loving and firm Papa and a man of the highest integrity. His legacy has set the standard for generations to come; family and officers of the future. He will be missed immensely. In lieu of food and flowers, the family requests that memorial contributions be made in Bob’s memory to the Special Olympics Colorado through the website Specialolympicsco.org. This was an organization that Bob spent years as the representative for the torch run. A service of full honors will be held at 2:30pm, July 28th at Ft Logan National Cemetery where he will be laid to rest with his wife and parents. A Celebration of Life will be planned for a future date that is TBD.

The family of Robert D. White created this Life Tributes page to make it easy to share your memories.

Robert D. White, 75 of Pueblo passed away and joined his beloved...

Send flowers to the White family.