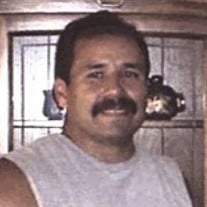 Robert V. Nunez 54, was suddenly called home to be with Jesus, June 16, 2021. Robert is proceeded in death by his father, Arthur E. Nunez, grandparents, Manuel & Jennie Escobedo, Arthur C. Nunez, Rose Hernandez, and great-nephew, Aaron R. Cruz. Robert’s life is best remembered for his love of Jesus. He had a wonderful love for the Lord. He arose each morning with our Lord in mind, calling my mom to check if she was awake, and than texting her scripture or talking to her about a particular verse or Book in Bible he wanted her to read. He would then read the Word, and pass along scripture to the family, reminding us to repent and to be ready when Jesus would come. He loved the Lord, and it was reflected in every conversation he had with others. He was not preachy, judgmental, or condemning in the way he spoke to other’s about our Lord. He spoke with love and hope in his knowledge of his relationship with Jesus. Robert also had a great love of boxing. He held many championship fights, one in which he was the Colorado Junior Golden Glove Champion in his weight division. He was being prepped for the Junior Olympics when he suffered a tragic injury ending his career as a boxer. Robert was a big teddy bear, and was known for his sensitivity and humor. He was always laughing and joking around. His nephew and nieces remember all the funny quotes and phrases he would tell them, and to this day, as grown adults, they remember with a smile on their faces, and now a tear in their hearts their Uncle Robert. His smile foretold of who he was as a person in Christ Jesus. He will be greatly missed, and never forgotten. A Funeral Service will be held at Roselawn Funeral Home Chapel, July 6, 2021, at 10:00am. Immediately following grave-side memorial, family will be received at St. Joseph’s Hall.

The family of Robert V. Nunez created this Life Tributes page to make it easy to share your memories.

Robert V. Nunez 54, was suddenly called home to be with Jesus,...

Send flowers to the Nunez family.