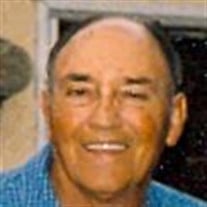 Robert Claude Guillen, 86. Robert was born on April, 22nd 1929 to Claude and Gladys Guillen and was called home on December, 19th 2015 He is Preceded in death by his parents, Claude and Gladys Guillen; son, Ronald Guillen; brothers, Donald and Barney Guillen; sister, Christine Noye; brother-in-law James Topping. He is survived by the love of his life, Rama Guillen; his "Boots". They were married 68 years and their love grew stronger every year it was a true love story. He is also survived by his daughter, Bernadette Guillen; grandchildren, Ronald (Melissa) Guillen, Robert Martinez, Ryan Guillen, Royce (Angela) Martinez, Rebecca Guillen, Randon Martinez; great grandchildren Dylan, Connor, Ella Jean, Lilyana Jill; Brothers and sisters, Virgina Topping, Edward (Maxine) Guillen, Charles (Gloria) Guillen, Harold (Charolette) Guillen, Lorraine Wright, Judy Watts and sister-in-law Betty Guillen; son-in-law Gerald Martinez and daughter-in-law Rose (Barry) Guillen-Brau; and many nieces and nephews whom he loved very much. Robert was a kind and compassionate man who was very strong in his faith. He loved his family more than anything, and made an impact on many people’s lives. He worked at the CFI steel mill for 30 years. Robert loved watching Broncos games and had a passion for boxing, fishing, riding his bike, and also spent 2 years in the U.S. Army as a medic. The love and compassion he gave to his family every day will surely be missed. His soul was truly one of a kind. Visitation will 9:00am, Tue Dec 29, 2015 followed by Funeral Service at 10:00am, both at Fellowship of the Rockies. Interment will be at Roselawn Cemetery.

The family of Robert C. Guillen created this Life Tributes page to make it easy to share your memories.

Send flowers to the Guillen family.