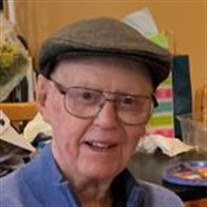 Early on Thanksgiving morning at Pueblo LifeCare center, Robert Lyle Berry, Architect and native son of Pueblo, Colorado, broke his earthly bonds and passed from this world peacefully. Bob, as he was known to most, was born February 18, 1925 and graduated from Centennial High in 1943. He soon thereafter joined his brothers Charlie and Bill in the WW2 effort enlisting in the U.S. Army Air Corp. After the war he met his wife Betty Marie and married in 1948. He attended CU Boulder, received his degree in Architectural Engineering and worked for Pueblo Architect Walter DeMordant before opening his own firm with his partner Don Moore in 1958. He was active with the Pueblo Sertoma club for a number of years and was an enthusiastic outdoors-man, hunting and fishing in many of Colorado’s mountains rivers and streams. He was an avid dancer and could often be found on the dance floors of the Fraternal Order of Eagles headquarters and anywhere else he could cut a rug. Or sing a song. He is survived by his six loving children: Barbara (Eric) Bye, Nancy (Parker Newby) Berry, James Berry, Becky (Jess) Atencio and his stepdaughters Sandy (Bud) May and Christy Johnson. Bob had in his two marriages, 14 grandchildren, 11 great grandchildren and many wonderful friends and family members around him. He was preceded in death by his first wife Betty Marie and second wife, Barbara A. Johnson; his parents, Marion Francis and Alida Corrine, his brothers Charles and Bill and his stepson Gary Johnson. Those who wish to donate to an organization can do so in Bob’s name by contacting Posada of Pueblo, a homeless transition shelter, at 719.545.8776. Also the website, https://www.posadapueblo.org. No flowers are being accepted by the family at this time. Cards can be sent to Becky Atencio, 103 N. Glendale, Pueblo, Colorado 81001. A warm thank you to all the caregivers at LifeCare who helped keep us in contact with our Dad during these trying times. Unfortunately we hadn’t touched him physically for 8 months.

Early on Thanksgiving morning at Pueblo LifeCare center, Robert Lyle Berry, Architect and native son of Pueblo, Colorado, broke his earthly bonds and passed from this world peacefully. Bob, as he was known to most, was born February 18, 1925... View Obituary & Service Information

The family of Robert L Berry created this Life Tributes page to make it easy to share your memories.

Send flowers to the Berry family.