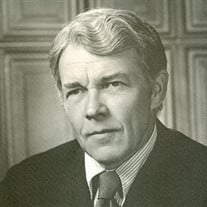 Robert Belcher was born in Pueblo January 5, 1923 to parents Lynn and Georgette. He graduated from Centennial High School and matriculated to C.U. in Boulder. Following the Pearl Harbor attack, Mr. Belcher enlisted in the Navy V 12 program. He had lasting memories of his time at the U.S. Naval Academy in that program, though football injuries sustained in high school and at C.U. prevented combat duty. He returned to C.U. and earned a B.Sc. degree in Electrical Engineering in 1944. Upon graduation, Bob joined the family business, Mountain Ice and Coal Co., begun by his grandfather in 1898. The original business was horse drawn hauling, then cutting ice from Palmer Lake and shipping it to Pueblo for sale. The business evolved from a utility (ice for refrigeration) into wholesale and retail ice as well as refrigerated and freezer warehouse space. Mr. Belcher sold the business in 1995. The one indulgence that Bob allowed himself was his Morgan sports car. His was made in 1985 (by hand in England), and he became quite recognizable driving the small, bright red convertible on the streets of Pueblo. In retirement, Bob enjoyed tennis, and with wife Olive taking their grandchildren to Disneyworld, Washington D.C., and New York. Later, Mr. Belcher lunched once a week with Centennial High School classmates until just before his death. Mr. Belcher is survived by his always active wife of 67 years, Olive Scribner Belcher, sons John, Jim and Lynn and their wives, four terrific grandchildren, Kris, Rob, Katherine and John and their families, including four wonderful great grandchildren. The Belcher family requests that in lieu of flowers, remembrances of Mr. Belcher be made to Sangre de Cristo Hospice & Palliative Care, or Church of the Ascension & Holy Trinity.

The family of Robert Lynn Belcher created this Life Tributes page to make it easy to share your memories.

Send flowers to the Belcher family.