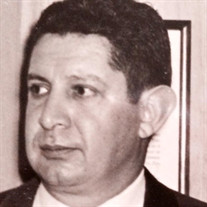 Richard “Archie” Archuleta. Sept 5th 1925-August 12th 2015 Richard was born in Pueblo, Colorado to the union of Toribio and Isabel Archuleta. He passsed in the care of Hope West Hospice in Grand Junction Colorado. After high school Archie joined the service and was a gunner on a B29 during WW2 he married the love of his life Olga and shared over 60 years of marriage. Together they raised each other’s children and had three more, for a total of 6 children. Archie was a great provider and hard worker. He became a machinist and was a business entrepreneur as a business owner of OK Tooling. He had a love for family, God and community. He was always supporting projects and dreams that his children pursued. Hobbies included spending time with family, fishing/camping, poker, dancing and road trips. He of course loved a cold beer. Of the lessons that he taught us was to never give up on a dream, persevere and just do it. Be different and love your family. Richard is survived by his wife Olga Archuleta, children Don Archuleta, Bill Lucero, Late Patrick Lucero, Chope Archuleta, Mike Archuleta and Ona Ridgway. Numerous grandchildren to include Jodi Lucero, Cori Lucero, Jason Lucero, Julie Bowers, Andrew Archuletta, Richard Archuleta the 3rd, Robert Archuleta, Krystina Archuleta, Nycholle Archuleta, Tiffany McClure, Michael Archuleta, Kyle Ridgway, Austin Ridgway and Sean Ridgway. In lieu of flowers please send donations to Hope West Hospice in Grand Junction in Archie’s name to help support the care to give back to others in need. Graveside Service will be 1:00pm, Friday, September 4th 2015 at Roselawn Cemetery.

The family of Richard "Archie" Archuleta created this Life Tributes page to make it easy to share your memories.