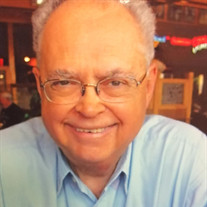 Phillip Eugene Boling, beloved husband, father, grandfather, great grandfather, brother and friend was born February 10, 1943 to Ferdinand (Bud) Boling and Maxine Landis Boling Moroney in Pueblo, CO. He passed away on November 13, 2019 in Denver, surrounded by his family. On June 7, 1961 he graduated from Pueblo East High School. Upon graduation he joined the U.S. Air Force. After basic training, he was stationed in both Roswell, NM and Newfoundland and served as an aircraft refueler in the Strategic Air Command. When Phil left the Air Force he moved to Denver where he met the love of his life, Elizabeth (Liz) Anne Walsh. They were married May 29, 1968 and celebrated their Golden Anniversary in 2018. Phil always referred to Liz as his rudder, his Southern Cross and his North Star. Phil had a successful career with Coors Brewery and Keebler Cookie Company. After retirement, he worked at both the Colorado Motor Vehicle Department and Sears. No matter what job he had or what task was at hand, he always went above and beyond to get the job done. When questioned about his previous employment, he would always say, “The good ole’ times when I was working for the Man.” Phil had a wonderful sense of humor and at any moment he would try to be sarcastic to make anyone laugh. Phil and Liz were both avid readers and loved cooking and traveling together. They knew all the best restaurants in Las Vegas and San Diego and met many of the Executive Chefs on their frequent visits. Phil was devoted to his family and his passing has left a great void in their lives. The lessons and values he taught the family, will be forever instilled in their hearts. Phil will forever be missed and never forgotten. Our hearts are heavy with grief, but relieved he is at peace. He was preceded in death by his parents and his beloved wife, Liz. He is survived by his brothers Dick Boling and wife Jane of Aurora, KS; brother Gary Moroney and his wife, Dee of Pueblo West; sister Kim Colletti and husband Matt of Pueblo; sons James Boling and Scott Boling, both of Denver, CO; grandchildren, Keyara, Alaura, Jacob, Rose, Kevin, Chase and Chyler, all of Denver; and great grandson, Jeffrey of Denver. After a graveside service, Phil will be interred at Roselawn Cemetery, Pueblo, CO on November 25, 2019 at 12:00 noon.

The family of Phillip Eugene Boling created this Life Tributes page to make it easy to share your memories.

Send flowers to the Boling family.