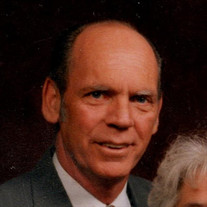 Sergeant First Class Patrick G. Tucker, 65, of Pueblo, Colorado, went to be with the Lord on Monday, April 17, 2017 at home. Born to Walter Lee and Dorothy Dean Tucker at Holloman AFB, New Mexico. Patrick is preceded in death by his loving wife of 40 years, Susan K., his parent Walter and Dorothy, his sisters Sylvia June and Carrolyn Ann Barton. He is survived by his three children Troy (Wendi) Tucker, Tiffiny (Larry) Larkins, and Travis Tucker, his sisters Patricia Jean (Bill), Terry (JR) Ewing, his brothers, Walter Jr. (Pam) Tucker, Michael (Irene) Tucker, Charles (Sherry) Hoskins, his grandchildren, Jonathon, Adam, Brandon, Joseph, Nicholas, Ryann, Mathew, Corben, Shandean and Kelsie, and great grandchildren, Samuel, Lilli, Paislee and Kaidyn, and special friend Ruth Anzlovar and numerous nieces, nephews, extended family and friends. He was greatly loved by many and never knew a stranger. Patrick honorably retired from the United States Army after proudly serving his country for 20 years. His service to his country included one tour in Vietnam and many days of sacrifice away from his family, friends and home. He enjoyed life tremendously especially when it included fishing, hunting, riding his Harley and being the life of the party. More than any of these though, he truly loved spending time with his family, whether, camping, riding atv’s or just barbequing in the backyard, this is where most of our memories were made. He was a loving husband, father, grandpa, great-grandpa, brother, and friend! His life touched so many lives in this world through his smile, his laughter, his shining blue eyes and his outrageous personality. The family would like to give special thanks to the staff at Sangre de Cristo Hospice and the Roselawn Funeral Home and Cemetery for their dedication, service and compassion in caring for our beloved father.

Sergeant First Class Patrick G. Tucker, 65, of Pueblo, Colorado, went to be with the Lord on Monday, April 17, 2017 at home. Born to Walter Lee and Dorothy Dean Tucker at Holloman AFB, New Mexico. Patrick is preceded in death by his loving... View Obituary & Service Information

The family of Patrick G Tucker created this Life Tributes page to make it easy to share your memories.

Send flowers to the Tucker family.