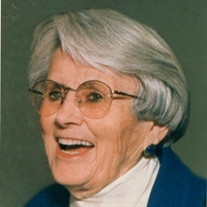 Patricia Ducy Kelly passed peacefully on October 30. She was a visionary leader of the Pueblo community. All her life, she worked tirelessly for the betterment of Pueblo and the state. Patricia was born in Pueblo, on November 11, 1923, the... View Obituary & Service Information

The family of Patricia Ducy Kelly created this Life Tributes page to make it easy to share your memories.

Patricia Ducy Kelly passed peacefully on October 30. She was...

Send flowers to the Kelly family.