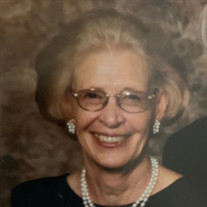 Olive Scribner Belcher was born in Pueblo August 12, 1928 to parents Spencer and Olive Scribner, passed away December 8, 2019. She graduated from Centennial High School, attended C.S.U. in Ft. Collins, then married Bob Belcher in 1949. Sons John, Jim, and Lynn followed shortly thereafter. While always socially active, she got rollin’ after Lynn’s graduation from South. She attended nursing school at SCSC and received her LPN certification shortly thereafter. With characteristic fervor, she was soon assisting in surgery. Olive had proud and fond memories of working with Dr. John Weaver, whom she held in highest regard. Her next pursuit was sales of stationery products on behalf of Rocky Mountain Bank Note Company. Most noted across the West for printing of bank checks, this business was co-founded by her grandfather along with two other family patriarchs in 1907. Calling and cold-calling business executives from Colorado Springs to Raton came easily to Olive and she thrived on the personal interaction and activity of her role. Some years later, Olive located and organized the heirs of the three founding families, who together effected the sale of this substantial company. Throughout the 70’s and 80’s, Olive expanded her interest in cooking. She participated in several cooking excursions to France and Italy. This passion inspired her next endeavor. With good friend Peggy Seavy, she founded a very small kitchen shop during the early re-development of the Union Depot District, hence - Seabels. Built upon the enthusiasm and synergy of the two partners, this tiny space became a hub for cooking enthusiasts. The legacy of Seabels remains, now under the direction of the “Potestio girls”. Following her professional endeavors, Olive remained very active. She organized trips with Bob, taking grandchildren Kris, Rob, Katherine and John to Disneyworld, Washington D.C., and New York, as they reached appropriate age. The retired couple also took two sailing trips in the Greek islands under charter with Pueblo native Christy Herman. Macular degeneration imposed its restrictions on Olive as early as the mid 90’s, at which point she could no longer drive. This greatly reduced her independence, but she made the adjustment and moved on. Playing a bit more golf was an obvious shift for someone visually impaired. And notably, with her great friend Sandy Rawlings, she volunteered at the Cooperative Care Center. “Olive’s Closet” was recently dedicated there. References to a few individuals above is intentional as her sociability was a hallmark of her life, and the Pueblo community was so positive in its fulfillment. We would be remiss in not mentioning Helen Tallman, a great friend for much of her life. At the memorial service of Kathy Ducy Dufford, a friend since kindergarten, another observant friend offered that Olive was “irrepressible”. That is the perfect description for how she lived. In 1983, the Belcher Foundation was formed as a platform from which the family could support worthy Pueblo-based causes, with an emphasis on childhood socialization and education. Through its 35-year existence Olive played an active role in the Foundation’s activities. The Foundation has recently partnered with the Pueblo Boys and Girls Club in a program designed to enhance teen skills specific to college and career readiness. The family wishes to express immense gratitude to Kathy Baxter, who provided unending friendship, support, care, and love to Olive for her last 10 years. In addition to her three sons and four grandchildren, Olive is survived by daughters-in-law Carol, Sally and Lori; and 5 thriving great grandchildren; and four granddaughters-in-law. The family asks that in lieu of flowers, donations be made to the Boys and Girls Club of Pueblo, Cooperative Care Center, Sangre de Cristo Hospice, or the Church of the Ascension & Holy Trinity. Or to the Springer Spaniel Rescue, Inc., which “rescued” Olive’s final companion Aimee – the last in the line of Springers in the Belcher household for over seventy years. A Memorial Service will be held at the Ascension and Holy Trinity Episcopal Church, Reverend Christy Shain-Hendricks presiding, at 1:00pm, Friday, January 3, with reception to follow at the Pueblo Country Club. Online condolences can be made at roselawnpueblo.org

The family of Olive Scribner Belcher created this Life Tributes page to make it easy to share your memories.

Send flowers to the Belcher family.