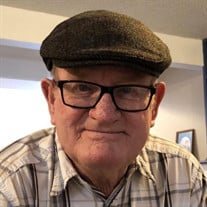 Neil J. Doyle, Chief Petty Officer, United States Navy – retired, 83. Neil was born on June 17, 1937 to Otto and Irene Doyle in Ft. Morgan, Colorado and went home on February 16, 2021. His parents; 11 brothers and sisters; his beloved son, Paul and Paul’s wife Kathy Jo Doyle; his grandsons, Alex and Nicholas Doyle, and Ryan Eldridge went before him. Remaining to cherish the wonderful life he lived is his loving wife of 60 years, Sandra Doyle; his son, Michael Doyle; daughter, Johnna Doyle and her children, Kristen Horton and Michaela (Edward) Christenson; son, Russell (Tangela) Doyle, and their children Jennifer (Tyler) Wright, Dylan Doyle, Robert Eldridge, and Elizabeth Yeiter. He is also survived by Paul’s children, Brad (Becky) and Brenda Barlish; special great grandson, Milo Fawkes; numerous other great grandchildren; one brother and sister along with numerous other family. Neil served 20 years in the United State Navy as an aircraft mechanic and later operated his own business, Broadway Appliance for 35 years. He was a quiet man who loved to fix and build anything. He spent many hours with his sons working on cars, hunting, fishing and working on appliances, and he enjoyed working in the yard with his daughter. He was a faithful husband who loved his family unconditionally and was generous with his talents. He was willing to help many that were down on their luck, he loved animals, and more than once he travelled many miles in the middle of the night to pick up kids in broken down cars. He was proud of his grandchildren and enjoyed spending time with them. He loved the Lord and served faithfully at his church. The family would like to thank the wonderful staff at Sangre de Cristo Hospice that provided such tender care to him. A viewing will be held on Monday, February 22nd from 4:00pm – 6:00pm at Roselawn Funeral Home. Funeral Service will be held on Tuesday, February 23rd at 11:00 a.m. at Fellowship of the Rockies church, 3892 W. Northern Ave, Pueblo. All are welcome to attend. Interment to follow at Roselawn Cemetery. Online condolences can be made at roselawnpueblo.org