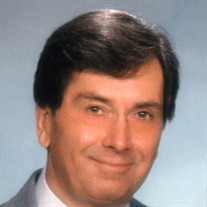 Michael J. Kosanovich, 76, longtime Pueblo resident, peacefully passed into eternity to be with the Lord on Feb 11, 2016. Michael was born on Oct 30, 1939. He graduated from Central High School in 1958, and then attended Pueblo College, graduating in 1960 with a degree in engineering. He served in the U.S. Army National Guard of Colorado-Airborne Special Forces, from 1963 to 1969, when he was honorably discharged. In August of 1971, he married the love of his life, Nancy (nee Stupar) of Pueblo. They became the proud parents of a daughter, Jennifer in 1982. After 32 years as a brilliant combustion engineer for the CF&I, he retired in 1993. He is preceded in death by his parents, Jennie and Joseph Kosanovich; sisters, Helen Kosanovich, Bertha Shinovich, Betty Perko, Virginia Mutz, and Josephine Rupar. Michael is survived by his loving wife Nancy of 44 years; daughter, Jennifer (Aaron) Koen; new grandson, Zachariah Michael; sister, Dorothy (Phillip) DeHaven; and many beloved nieces, nephews, and friends. He was a passionate outdoorsman, and true sportsman. He loved fishing, hunting, weightlifting, running, watching boxing, and his dogs. He was an avid reader, and a master carpenter. He benevolently loved his family, and was a devoted husband, father, grandfather, and friend. He was always there to lend a helping hand to others, and will be greatly missed. Special thanks to Brookdale El Camino Assisted Living, and Horizon Heights Riverwalk Post Acute and Rehabilitation staff; who took special care of Michael during his final days. In lieu of flowers, donations can be made in Michael’s memory to the American Parkinson’s Disease Association, or Pueblo Animal Services through the funeral home. MEMORIAL SCRIPTURE SERVICE will be 10:00am, Wed., Feb 17, 2016 at Our Lady of the Meadows.

Michael J. Kosanovich, 76, longtime Pueblo resident, peacefully passed into eternity to be with the Lord on Feb 11, 2016. Michael was born on Oct 30, 1939. He graduated from Central High School in 1958, and then attended Pueblo College, graduating... View Obituary & Service Information

The family of Michael Joseph Kosanovich created this Life Tributes page to make it easy to share your memories.

Send flowers to the Kosanovich family.