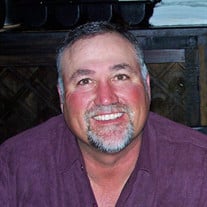 Mark Anthony Clementi 62, of Pueblo, Colorado, left this world on August 31, 2021 to be with his Lord and Savior Jesus Christ. Preceded in death by his mother, Evelyn Clementi; and his mother-in-law and father-in-law, Jack and Marilyn Snell. Survived by his wife of 41 years, Kay (Snell) Clementi; and his 5 children. Molly (Chris) Borgstedt, Leah (Hughy) Acree, Mark (Olivia) Clementi, Lexie (Brian) Mater and Luke Clementi; Grandchildren, Colter, Tavyn, Grayson and Preslie Borgstedt, Macelyn Acree, Oakley Clementi, Avianna and Aceyn Mater; his father, Louis Clementi; brothers, Randy (Shawnna) Clementi and Ron Clementi; his Uncle, Dan and Pat Snell; uncle, Chuck and Patty Dionisio; Aunt, Mary Ann Bragg; Brothers-in-law and sisters-in-law, Bob and Linda Colletti, Jack and Cathy Snell, Jim and Christy Snell. He also leaves behind numerous nieces and nephews. Mark was born on November 11, 1958 to Evelyn and Louis Clementi, the middle of three boys. He was lovingly nicknamed ‘Tank ’ and ‘Big MAC ’. Mark was a farmer at heart. He began farming almost from the time he could walk, pulling rows at 9 years of age, helping his uncles on the Dionisio Family Farm. Mark graduated from Pueblo County High School in 1976 where he excelled at athletics, mainly football and basketball. After high school, he continued farming and began running cattle with his father-in-law and the Snell Family. He married his high school sweetheart, Kay, on November 15, 1980. He held numerous jobs over the years and was always willing to do whatever it took to provide for his family. Beginning in 1995 he worked at the Steel Mill for 3 years but ultimately ended up farming again. On June 30, 2021 he retired from Colorado Correctional Industries as a Supervisor II running the farm at the Canon City facility. Because of the unbelievable generosity of his DOC family, who donated 184 hours of leave within one day, he was able to reach his 21 year anniversary. He was overwhelmed with gratitude to all who donated the hours. Mark had a heart of gold, he was humble, simple and there was no pretense in him. He never knew a stranger, he was friendly and approachable with a genuine smile that would light up the room, making even a stranger feel like they could pour out their heart to him. Mark loved Jesus, his wife, kids and grandkids, his friends and his farm. He was cherished and loved deeply by his family and anyone who knew him. If there was one thing that Mark would want you to take away from knowing him, it's that he was the man he was because of Jesus in his heart. Jesus is the Way the Truth and the Life! Our hope remains, we will see him again! We would like to send a special thank you to Naomi Hernandez, Melissa Romero, Richelle Lucero and Abode Hospice for their love and care during this time. There will be an open mic session during the service and the family would love to hear your stories about Mark. To livestream the service click on the following link: https://youtu.be/uzuUU3368AU

Mark Anthony Clementi 62, of Pueblo, Colorado, left this world on August 31, 2021 to be with his Lord and Savior Jesus Christ. Preceded in death by his mother, Evelyn Clementi; and his mother-in-law and father-in-law, Jack and Marilyn Snell.... View Obituary & Service Information

The family of Mark Anthony Clementi created this Life Tributes page to make it easy to share your memories.

Send flowers to the Clementi family.