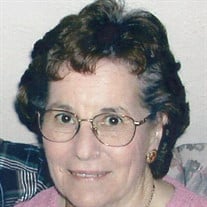 Margaret Fern Rumsey, 95, of Pueblo, Colo. went to be with the Lord Jan. 26, 2020 in Pueblo. Preceded in death by her loving husband of 67 years, James Rumsey; parents, Channie Clifford and Bertha (Rogers) Beghtel; sisters, Edna (Joe) Stephenson, Ruth Eastman; and brother, Charles (Lorene) Beghtel; grand- daughters, Michele Lynn Rumsey and Amy Renee Rumsey; great-grand-daughters, Erika Ann Girasia, Shaela Faith Girasia and Norah Elyse Horn. Survived by her sons, Jim (Carolyn) Rumsey, Barry (Vicki) Rumsey; daughter, Rondii (Keith) Horn; grandchildren; Janele (Brad) Graham, Samantha (Eric) Girasia, Joshua (Katie) Rumsey, Alisha (Burton) Williams, Jonathan Rumsey, Abigail Rumsey, Caleb (Mandy) Horn, and Travis (Natalie) Horn; great-great-grandchildren; Christian, Courtney Watson, and Colton Graham, Ethan and Aubrey Girasia, Julia, Jillian, and James Rumsey, Madalyn, Everett, Wayde, and Evelyn Williams, Jonathan, Koebel, and Christian Rumsey, Amelia and Elijah Horn, Titus and Jude Horn, and brother-in-law, Tim Eastman. Margaret grew up in La Junta, CO where she met and married James (Jay) Rumsey in 1942. Both their mothers liked the idea so much that they traveled by train to Raton, NM with them to be their witnesses. Her first real job was at an ice cream shop in La Junta which fueled her lifelong love for ice cream. She also cared for an elderly neighbor part time. Almost a year before she and Jay got married WWII had begun and she got a job at the air base in La Junta where she worked repairing the B17 and B25 training bombers. Their first son, Jim, was born while they still lived in La Junta. Around 1951 the moved to Pueblo and, over several years, built a house on Pueblo’s north side where they lived the rest of their lives. After moving to Pueblo, Margaret and Jay had two more children, Barry and Rondii. In 1965 Margaret got a job at the Colorado State Hospital earning her certification as an Occupational Therapist Assistant. She spent 25 years working there until she retired in 1990. She continued volunteering there for at least 9 more years. In their retirement years they went camping more often and took several trips to faraway places. Jay and Margaret, along with her sister, Ruth and her husband Tim, took their motor homes to Alaska taking the ferry from Washington up and then driving back through Canada. They also went to Europe once and went with the Senior group from church to see the changing of the leaves in the northeast U.S. They were members of Good Sam’s RV club for several years which broadened their horizons a bit also. Margaret loved her flower gardens, especially tending to her roses. She was outside every chance she got picking up trash, leaves, sticks, and anything else that didn’t look like it belonged. Visitation will be from 6 to 8 p.m. Thursday, Jan. 30, 2020, at Roselawn Funeral Home. Funeral service will be 11 a.m. Friday, Jan. 31, 2020, in the Chapel at Roselawn Funeral Home

The family of Margaret Fern Rumsey created this Life Tributes page to make it easy to share your memories.

Send flowers to the Rumsey family.