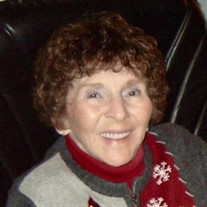 Madeline Janice Suazo, age 83 of Pueblo, passed away Friday, April 1, 2022. Madeline was born in Erie, CO on October 28, 1938. Madeline was preceded in death by her parents Bennie and Edna (Pope) Ray; preceded in death by her older sister, Margaret Wilder; and younger brother, Kenneth Ray. She was a coal miner’s daughter tough as one could be but loving as the day is long. Survived by her former husband, Dan Suazo; children Tim (Therese) Suazo, David (Jill) Suazo, Aaron (Annette) Suazo, Jennifer Suazo (Rick) Ramey all of Pueblo; grandchildren, Stephanie (Chad) Simmons, Evan (Allyn) Suazo, Genevieve (Travis) McKenzie, Noah Suazo and Hannah Suazo; great grandchildren Tanner Simmons, Hudson Simmons, Rylin Suazo, Ezra Suazo; as well as many much loved nieces and nephews. For Madeline, family meant everything to her and was her life’s goals, desires, aspirations, and joys. She was a wonderful homemaker, skilled beyond belief, a self taught seamstress with the ability to make any type of garment including wedding dresses. She was an amazing cook passing down recipes and the knowledge to make those culinary dishes. Once her children were grown Madeline worked as a seamstress then worked for a lengthy period of time for Mike Somes of Farmers Insurance. She was a member of The Peak Evangelical Church pastored by Craig (Denise) Chambers. Madeline was a Christian, a believer in the Lord Jesus Christ for the salvation of her soul. Graveside Memorial Service will take place at Roselawn Cemetery, 1706 Roselawn Road, Pueblo, CO on April 12, 2022 at 11:00 A.M. In lieu of flowers, memorial donations may be made to The Peak Evangelical Church, PO Box 7315 Pueblo West, CO 81007. Online condolences may be sent to the family at www.roselawnpueblo.org.

The family of Madeline J Suazo created this Life Tributes page to make it easy to share your memories.

Send flowers to the Suazo family.