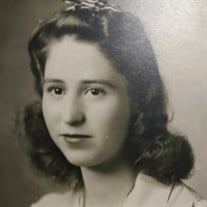 On the morning of September 12th, 11 days before her 96th birthday, Madeline Irene Brown Fox passed away peacefully during her sleep at her home in Pueblo, Colorado. Madeline Brown was born on September 23, 1925 to Dora and Donal Brown. Madeline was raised in a loving home with six brothers and three sisters. She also had a wonderful step-father, Seniff Gillette and two step-sisters. They lived through the great depression, wars and slim times. They were a close family who protected and took care of each other. Madeline married Dale Fox and together they had five children, Dennis (Erma) Fox, Nadine Fox, Bob (Shirley) Fox, Tim and Robin (James) Read. After many years of an abusive marriage, Madeline made the decision to leave when their youngest child was a baby. Madeline raised four children on her own. She was strong and courageous and her love for her children was her number one priority. She worked as a nurse's aide at a senior care facility for 50 cents an hour until her youngest child was twelve. Madeline then worked at her brother’s pizza shop, Papa Ray’s Pizza, in Hastings, Nebraska until she retired. Once retired, Madeline moved to Grand Junction, Colorado. Madeline volunteered serving lunch at her residence. She had many friends during that time. She babysat many of her grandchildren and great grandchildren and would take them downtown for walks, to the park and for ice cream. Madeline loved Husker football, Thanksgiving and the mountains of Colorado. Madeline loved to take trips and her family enjoyed taking her to new places. She was adventurous and went with senior groups to Laughlin Nevada. Madeline loved to read books and would read Zane Gray and Louis Lamour to her kids when they were young. She wanted to retire in a room full of books. Unfortunately she lost her eyesight but that didn’t stop her love of reading. She began listening to books on tape and would spend hours each day fully engulfed in her latest novel. Her beloved daughter-in-law, Erma, kept up on her book supply so she always had her next one ready to go. Madeline always told her children that they could be anything when they grew up. She taught them that they were no better than anyone else, but they were as good as everyone else. She taught her children to work hard, to love their country and family. She told them to be honest, to own what you do, and to apologize when you should. She was the epitome of the saying, “tough times don’t last, tough people do.” Her family never doubted how much she loved them because she told them and showed them constantly. As she aged and lost her sight and hearing she would often question why she is still alive. Her daughter Robin would remind her that the Good Lord (that’s how Madeline addressed Him) wasn’t done with her yet. She would ask the Good Lord to give her what she needed to do on earth, so that she could go home to Him. Madeline’s memory was sharp and often better than many others in the family. She remembered everyones birthdays and sent cards every year. Madeline was preceded in death by her parents and all of her siblings except for her youngest brother, Keith Brown. She was also preceded in death by her three sons and one grandson. Madeline is survived by her daughters Nadine and Robin (James), and daughters-in-law Erma and Shirley. She has 16 grandchildren, 25 great grandchildren and 9 great great grandchildren. She was loved and adored by her family. Many of her grandchildren looked up to her as their hero. She didn’t have much to give her family other than love, but she taught us that love is the most important thing to give. Madeline, Mom, Grandma, our world will never be the same without you in it. You were our angel, our Mom, our protector, the love and head of our family. Enjoy your heavenly home with your sons, your parents, your siblings and the many other relatives and friends that were there to embrace you and celebrate your homecoming. Tell the Good Lord He did a great when He gave us the gift of YOU. See you in Heaven and remember always, we love you so so much.

On the morning of September 12th, 11 days before her 96th birthday, Madeline Irene Brown Fox passed away peacefully during her sleep at her home in Pueblo, Colorado. Madeline Brown was born on September 23, 1925 to Dora and Donal Brown. Madeline... View Obituary & Service Information

The family of Madeline Irene Brown Fox created this Life Tributes page to make it easy to share your memories.