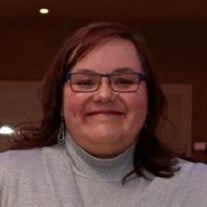 Louise Mary Bowne, of Vadnais Heights, Minnesota, passed away January 8, 2019 in Pueblo, Colorado. She was 39 years old. Louise was born in Missoula, Montana, on July 27, 1979, to Louis and Kathleen (Kathy) Bowne. She moved to Columbia Falls, Montana as a teenager and graduated from Columbia Falls High School. She forever thought of Columbia Falls and Montana as home. She earned a Bachelor's degree in Spanish, Russian, and International Relations from Concordia College in Moorhead, Minnesota. She worked as a Senior Supply Chain Specialist for Ecolab in St. Paul, Minnesota. She enjoyed working with her coworkers. She spent a year abroad in Castellon de la Plana, Spain during her junior year of high school and a semester in St. Petersburg, Russia during college. She enjoyed travelling and spending time with her family. She enjoyed camping with her friend, Chris, around Duluth, Minnesota. She loved her nephews and enjoyed spoiling them with gifts Louise is survived by her cat, Carma; her father, Louis, sister Emily Sell, brother-in-law Andrew and two nephews Steven and Jacob of Pueblo; aunt Mary Lou Riedy, and friend H. Joan Bruggink, of Wisconsin; uncle Gary, aunt Lisa and three cousins, of North Carolina; and Grandmother, Donna Bowne of Colorado Springs. She is also survived by her host families in Castellon de la Plans, Spain; and St. Petersburg, Russia; as well as numerous friends. Louise was preceded in death by her mother, Kathy, grandmother, Ida Riedy, and grandfather, Robert Bowne. Memorials may be made to Camp Marshall, in the Episcopal Diocese of Montana (www.campmarshallmontana.org/donate), Concordia College, Moorhead, MN (www.concordiacollege.edu/giving/), an animal shelter in your area, or a charity of one's choosing. A celebration of life will be held at 3:00 p.m. on Friday, February 1, at Church of the Ascension and Holy Trinity, 400 W. 18th Street, Pueblo. Another celebration of life will be held at 4:00 p.m. on Monday, February 11, at St. Matthew’s Episcopal Church, 2136 Carter Avenue, St. Paul with a reception to follow the service.

Louise Mary Bowne, of Vadnais Heights, Minnesota, passed away January 8, 2019 in Pueblo, Colorado. She was 39 years old. Louise was born in Missoula, Montana, on July 27, 1979, to Louis and Kathleen (Kathy) Bowne. She moved to Columbia Falls,... View Obituary & Service Information

The family of Louise Mary Bowne created this Life Tributes page to make it easy to share your memories.

Send flowers to the Bowne family.