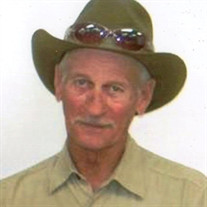 Full: with photo (RUN Thur, Dec 15 ,2016 Pueblo Chieftain) Leighton M. Hovet. 67 departed this life unexpectedly December 12, 2016. He was born November 14, 1949 in Williston, North Dakota to Herb and Virginia Hovet. He is preceded in death by his parents; sister, Judy Mikeska; brother, Loren Hovet; and father and mother in law, Tony and Esther Thomas. Survived by his loving wife of 47 years, Peg; children, Brandon (Bobbie Jo), and Nathan; grandchildren, Benjamin Leigh, and Brooke; also survived by brother, Jim (Norma Jean) Hovet, Fruita, CO; sister, Anna Lee Crum, Cotopaxi, Co; sisters in law, Pattie (Chuck) Dionisio, and Toni Sue (Randy) Reeves; along with numerous nieces and nephews. He was employed by Pate Construction for the last 35 years as a welder and heavy equipment operator. In the construction world, he earned the reputation as the best back hoe operator in the state of Colorado. He also truly enjoyed doing steel fabrication projects as a job and hobby. He would get excited over buying new tools and helmets to do his projects. His family compared his excitement to a woman shopping for a whole new outfit. In lieu of food and flowers, those who wish may donate to PAWS for life Animal Welfare or the American Heart Association in Leighton’s name. Viewing will be 10:00am with Funeral Service to follow at 11:00am, both Saturday, December 17, 2016 at Roselawn Funeral home Chapel

The family of Leighton M Hovet created this Life Tributes page to make it easy to share your memories.

Send flowers to the Hovet family.