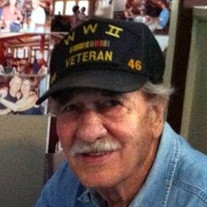 Joseph R. Skufca, a lifelong resident of Pueblo, passed away peacefully in his sleep on June 26, 2016 at the age of 90. Joseph was born to the late Martin Skufca and Mary Zemljak Skufca on March 15, 1926 and was the youngest of their three children. He was preceded in death by his sister, Mary Dudley; and his brother, Martin “Teeny” Skufca. He is survived by his Daughter, Paulette (Mike) Gengenbacher of Gilbert, AZ; Granddaughter, Shelly (Scott) Fisher of Maricopa, AZ; his Great-Granddaughter, Gabriella Fisher; his nephews, Don Dudley of Pomfret, Conn; and family and David Dudley (Margie) of Pueblo and family. He also leaves behind his dear friends, Lawrence and Ellie Archuletta, whom he considered family. Joe was one of the few remaining members of the “Greatest Generation.” He graduated from Pueblo Central High School in 1944 and enlisted in the Army to serve his country in WWII. He was part of the 1631st Combat Engineer Battalion and saw action on numerous battlefields in the Pacific. He was injured when a Japanese suicide bomber hit the transport ship he was on as they approached the island of Ie Shima. He contracted Malaria soon after landing there but refused to come home choosing to stay and fight with his unit. While on Ie Shima, he met war correspondent, Ernie Pyle, and was part of the detail that prepared his gravesite when he was killed by a sniper’s bullet. He was transferred to the 27th Infantry Division of the 10th Army under General Buckner where he participated in the Invasion of Okinawa. He was honorably discharged and awarded two Bronze Stars. When the war ended in 1946, Joe came home and went to work for Jack Wesin at Star Grocery and Market as a Groceryman and Meat Cutter Apprentice under the VA program for disabled veterans. When he wasn’t working at the store, Joe started several businesses. He packed and sold nuts to the local taverns, was the first person to sell monofilament fishing line and bought large tin drums from the bakeries selling them to the packing houses. Joe continued to work for Jack Wesin and was instrumental in growing both the retail and wholesale business into one of the most successful small stores in town. Upon Jack’s retirement in 1960, Joe became the owner of Star Grocery. Several times over the last 20 years the Pueblo Chieftain has recognized Joe’s accomplishments and commitment to the community. Prior to his failing health in the last two years, Joe never missed a day of work. He was there five days a week 10 hours a day. Even as his health prevented him from coming to the store daily, he would still be there a few hours a week to see his customers and make sure everything was running smoothly. Joe was an avid fisherman and hunter. Any given Sunday he could be found on one of the streams or lakes in the state he dearly loved or hunting deer or geese. He was a life-long member of the Pueblo B.P.O. Elks Lodge #90. We will miss his quick sense of humor, his unwavering example of honesty, generosity, kindness and, especially, love and devotion to family and friends. Viewing 9:00am with Rosary to follow at 9:30am and Mass of the Resurrection to follow at 10:00am, Friday, July 1, 2016 at St Mary’s Church. Interment, Roselawn Cemetery with Military Honors. The family wishes to express heartfelt appreciation to Dr. Thomas Gaide and Rachel Perricone from whom Joe received many years of kind and quality care. The family is enormously grateful to all the caring staff of both Sharmar Assisted Living and Long Term Care, and Suncrest Hospice for providing comfort and care to Joe and support to his family during his final days. In lieu of flowers, donations may be sent to Suncrest Hospice. Online condolences can be made at roselawnpueblo.com

Joseph R. Skufca, a lifelong resident of Pueblo, passed away peacefully in his sleep on June 26, 2016 at the age of 90. Joseph was born to the late Martin Skufca and Mary Zemljak Skufca on March 15, 1926 and was the youngest of their three... View Obituary & Service Information

The family of Joseph R. Skufca created this Life Tributes page to make it easy to share your memories.

Joseph R. Skufca, a lifelong resident of Pueblo, passed away...

Send flowers to the Skufca family.