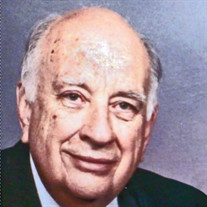 Joseph Addison Bullen, 95, lifetime Pueblo resident, passed away on February 4, 2021 in Pueblo, his demise hastened as a result of a recent bout with COVID. His survivors will remember his fiercely optimistic, inspiring nature, and generosity and love of family. Joe was born in Pueblo on March 26, 1925 to father Joseph A Bullen, Sr, and mother Evelyn Bullen. An exceptional student, he graduated as valedictorian of his Centennial High class and took a particular interest in the debate squad. Meeting his wife Betty Ann Hummell at Swarthmore College in Pennsylvania, they married, returned to Pueblo, and this marriage lasted until her death in November of 2020. They raised children Scott, now of Hudson, Massachusetts; Jeanne, who predeceased him in 2014; and Sharilyn Coxen of Mount Vernon, Oregon. Grandchildren by daughter Jeanne are Nikki Gonzales and Jason Shiell; and by daughter Sharilyn are Cassie Longest, and Brody and Kelly Coxen. Joe enlisted in the Naval Air Corps as a pilot in 1943. He narrowly avoided going into combat action due to the war ending first. After graduating with honors from Swarthmore College, Joe joined the family business of Fountain Sand and Gravel Company as foreman in 1948, became General Manager in 1954 and President in 1960. In 1964 Joe and ten other investors purchased this company, founded in 1913, with 74 employees from various family members. In 1972 the Fountain Sand and Gravel Company and its associated businesses were purchased by CF&I Steel Corporation. Joe served on the board of directors of the National Sand and Gravel Association, the National Ready Mixed Concrete Association and also the First National Bank of Pueblo. Bullen businesses including the Bullen Bridge Company spanning four family generations were showcased in a full-page article in the Pueblo Star Journal and Chieftain by renowned Colorado historian Ralph Taylor in 1964. [See the article in the photos tab.] In 1972 Joe entered the land development field, purchasing major parcels in Pueblo, in Pueblo West, and in Boulder. In Pueblo north of Highway 50 West he purchased the 1100 acres of land known as Outlook, which he master-planned, subdivided and developed. The Outlook development unfortunately suffered business failure in 1975 when a severe building recession largely ended homebuilding starts. Following this land development phase, Joe worked businesses in solar energy, homebuilding and insurance until illness hindered him this year. In his younger years. Joe focused especially on community service activities, He worked for many years on the Pueblo Chamber of Commerce as director and President, and was named “Outstanding Young Man of the Year” in 1953. In 1959 he was appointed chairman of its Community Welfare Committee to establish a housing code for the City of Pueblo, an ordinance enacted in 1961. He served as President of Pueblo Single Fund in 1951, successfully raising money from local business for charitable purposes. Single Fund was later to be known as United Way, and was one of the first such organizations in the nation. Joe joined the Kiwanis Club of Pueblo after graduation from college, and was appointed as its youngest President in 1953. Joe was instrumental in forming the South Pueblo Kiwanis club and in development of the Kiwanis Foundation program on behalf of underprivileged children in the community during 1953. Joe actively championed urban renewal in the Pueblo downtown area as President of the Industrial and Economic Development Commission. He promoted construction of the Department of Transportation Federal High Speed Ground Transportation test track north of the Pueblo Army Depot. Joe served on the board of directors of the Pueblo Young Men’s Christian Association, and accomplished relocation of the entry drive and expansion of the cabin facilities at the YMCA Camp Crockett. Joe played a leading role in the financing and launch of construction of the Presbyterian Towers senior residential facility in Pueblo, on whose board of directors he served continuously as a founding member until recently. Governor Love appointed Joe to a state judicial nominating committee in 1967, and to the board of directors of the Colorado School of the Deaf and Blind. Joe ran unsuccessfully for office in the state legislature as a Republican in 1968. Joe and wife Betty taught adult Sunday school at the Presbyterian Church of Pueblo. Joe and Betty were deeply involved in the original research and compilation of Morey Bernstein’s best-selling book, The Search For Bridey Murphy, from which developed in his mind an abiding faith in reincarnation. Joe’s was one of the group of five families who purchased the mountain ranch northwest of Rye known as Huckleberry Hills, a 500 acre summer home retreat where Joe constructed a (concrete!) home which the family enjoyed for many years. The family there walked and rode horseback, and Joe appreciated being able to continue in the tradition of mountain living he enjoyed as a child in Beulah at his parents’ summer home. The family enjoyed weekly ice-skating trips to the Broadmoor Ice Arena for many years. In his early childhood Joe loved to gaze up to the sky and identify planets, stars, and constellations. No doubt he now enjoys his new vantage point from above, looking down upon us with love and compassion. A compilation of family photographs can be found at https://www.flickr.com/photos/[email protected]/albums/72157717882358838

Joseph Addison Bullen, 95, lifetime Pueblo resident, passed away on February 4, 2021 in Pueblo, his demise hastened as a result of a recent bout with COVID. His survivors will remember his fiercely optimistic, inspiring nature, and generosity... View Obituary & Service Information

The family of Joseph Addison Bullen created this Life Tributes page to make it easy to share your memories.

Send flowers to the Bullen family.