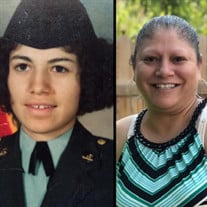 Jona "Michelle" Sanchez was born on February 13, 1970at St. Mary-Corwin Hospital in Pueblo, Colorado. Michelle peacefully departed our earth at 50 years old on February 10, 2021 at Baltimore Washington Medical Center in Maryland with both daughters, Lauren and Brittany, by her side. Michelle was born and raised in Pueblo, Colorado. She was the youngest out of the six children. As a child she had so much ambition to learn how to be independent so young and loved to teach herself new skills including breakdancing. She was a daddy's girl and loved to help with what she could. She loved to help with the family owned restaurant, El Nopal and tried to learn construction with her dad. Michelle went to school most of her life in Pueblo, but wanted to venture out and go live with her sister, Beverly Martino, in California. Michelle attended Irvine High School for partial of her senior year and returned back to Pueblo for the remaining of senior year and graduated from Central High School in 1989. In 1990, Michelle enlisted in the United States Army. Her first assignment was based in Fort Meade, Maryland form 1990 to 1996 to gain a technical specialty in Security and Intelligence with Army CCF. From 1996 to 1997, she was assigned to Korea. After, she was assigned to DIA form 1997 to 2000. From 2000 to 2001 she worked for U.S. customs and CIA. In 2001, she was reassigned to CCF until 2002. In 2003, Michelle returned to the civilian sector to work for Lockheed Martin on the first Department of Homeland Security contract. She held two senior policy advisor positions during her tenure. In 2007, she was assigned to Walter Reed Army medical Center for recovery to injury/illness. In 2009, she returned to Lockheed Martin to work on U.S. Army headquarters, Pentagon contract. In 2011, Michelle was called for active duty assigned to INSCOM. Michelle was a SSG and obtained Sanctuary with over 18 years of active duty time in service and effective October 2013 was put on active duty status to retire. She has completed several college courses and certifications for self knowledge. In May 2015, Michelle was diagnosed with breast cancer for the second time (stage III, aggressive, HER2). In 2017, she battled breast cancer for the third time. In 2018, she had retired from the United States Army providing 27 years of service. In 2019, she was diagnosed with stage IV breast cancer and was battling until 2021. Michelle was one of the strongest woman anyone has known. You would never see the pain, struggle, or stress being shown from her. She was also the most giving, kindest, and selfless person. Even to strangers, she would welcome them with open arms and take them in as her own. She had so much respect for others and loved to show others everything she has experienced in life. She was also a HUGE Denver Broncos fan and for diverse when it came to cultures and she LOVED her Korean and Thai food! She provided experiences to others that they may not have experienced on their own. She lived to make everyone happy, our happiness was her happiness. Especially her daughters, son-in-law, and two grandchildren.

The family of Jona "Michelle" Sanchez created this Life Tributes page to make it easy to share your memories.