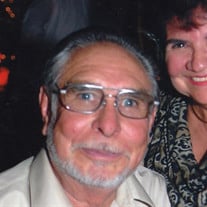 John Linsey Ulibarri of Pueblo, CO passed away on July 10th, 2018 at the age of 76. He was born in Farisita, Colorado on August 21st, 1941 to the late Alcario and Freda Ulibarri. John was a loving devoted husband, father, grandfather, brother and friend whom could fix anything and was always willing to lend a helping hand. His greatest joy was spending time outdoors with his friends and family, which often included fishing, camping, hunting, four-wheeling and boating. His other hobbies included; woodworking, wine making, canning, cooking and gardening. He also enjoyed spending his mornings going to the Steelworker’s Union Hall to meet up with his friends. When he turned eighteen he enlisted in the Air Force and attained the rank of Airman 2rd class and was assigned as an Engine Mechanic to the 97th Field Maintenance Squadron. He was honorably discharged March 13th, 1966 at the age of twenty-four. After leaving the Air Force he moved to Pueblo, CO where and become a steelworker at CF&I. When the mill shut down for a period of time, he worked for Byerly & Cosyleon. When the mill reopened, he returned and retired after thirty-nine years of service. He was a member of the Eagles Steel City Aeire and the Steel Workers Union No. 2102. This past May he celebrated forty-eight years of marriage with his wife. He was preceded in death by his parents, Alcario and Freda; his brother, Louie Ulibarri; his sister, Diane Valdez, and granddaughter, Lynsey Marie Ulibarri John is survived by his wife, Barbara; daughters, Celine(Mark) Perea, and Stacia Ulibarri; grandsons, Anthony John Perea, and Donavan Ben Perea; sister Marie Atencio, Honorary grandchildren, Antonio DeSilva (Mayck Melo) , Anna Skoett Ramker, numerous in-laws, nieces, nephews, cousins and friends that he considered as family. The Rosary will be Thursday, July 19th at 9:30 AM followed by Mass, both at Sacred Heart Cathedral 414 W. 11th Street Interment will be at Roselawn Cemetery 1706 Roselawn Rd at 2:45pm.

John Linsey Ulibarri of Pueblo, CO passed away on July 10th, 2018 at the age of 76. He was born in Farisita, Colorado on August 21st, 1941 to the late Alcario and Freda Ulibarri. John was a loving devoted husband, father, grandfather, brother... View Obituary & Service Information

The family of John Linsey Ulibarri created this Life Tributes page to make it easy to share your memories.

Send flowers to the Ulibarri family.