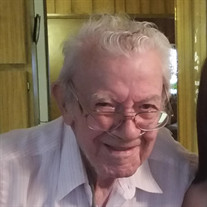 John Stillman Pearson was born the only child to Luke and Genevieve Pearson on May 3, 1921 in Goodpasture (Beulah), CO. He would spend his childhood there and eventually the family moved to Pueblo so he could attend school there. He graduated from Central High school in 1938 and went on to attend the university in Boulder, which is now the University of Colorado, for accounting. John took on several employment opportunities including working as a soda jerk in his younger years at Whitman’s Drug store, in the accounting department of the CF & I Steel Mill and doing the books at his in-law’s service station, Twombly’s. He fully settled into his accounting field when he joined Minnequa Bank and spent the better part of his adulthood there before settling in with Gorman Accounting which is where he ended his career at 91! John fell in love with and married Betty Lou Twombly and they had two boys, Jon Russell “Rusty” in 1945 and Martin William in 1948 whom they raised in Pueblo. Rusty joined the military and married Atsuko and they had three children: Hikaru (Maria) Pearson, Ayana (David) Fulcher and Michele (Bob) Dominguez. Martin pursued culinary arts, married Veena and they had two children: Heather (Canton) Keyes and Joshua (Cassandra) Pearson. In 1975, John and Betty Lou moved back to the property that he was born on and they remained there for the rest of their days. John passed away August 6, 2015 and is preceded in death by his parents, wife and youngest son and is survived by his loving sister-in-law Patricia O’Brien and his eldest child Rusty. He was also blessed to have the above grandchildren, ten great-grandchildren, two nieces, one great niece and a very special caregiver, Stacy Kizzair. During his lifetime John and Betty Lou traveled extensively within the United States as well as visiting Europe, Alaska twice, Australia and Fiji. They were longtime members of the Minnequa Club and the Beulah Valley United Methodist Church and he was a 70 year member of the local Elks lodge. He loved to golf and fish and loved his sports especially the Colorado Rockies. Just a few of the fondest memories of John “Grandpa” that family have include learning how to fish and play pool, his love of Coors original in the can, making homemade apricot and chocolate ice cream and watching Walker Texas Ranger. He was deeply loved, greatly admired and will be missed beyond words. Memorial Service will be 1:00pm Sunday, August 16, 2015 at Beulah Valley United Methodist Church

John Stillman Pearson was born the only child to Luke and Genevieve Pearson on May 3, 1921 in Goodpasture (Beulah), CO. He would spend his childhood there and eventually the family moved to Pueblo so he could attend school there. He graduated... View Obituary & Service Information

The family of John Stillman Pearson created this Life Tributes page to make it easy to share your memories.

John Stillman Pearson was born the only child to Luke and Genevieve...

Send flowers to the Pearson family.