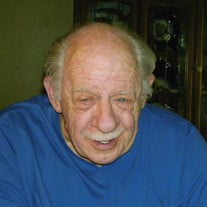 John "Jack" Robert Odenbrett passed from this life into the presence of a loving God on Saturday, February 20, 2021 in Pueblo, Colorado at Sangre de Christo Hospice House, with his sweetheart Lucy and her daughter at his side. John was born May 6, 1941 in Fulda, Minnesota, the third child of Robert John and Lucille Sophie May (Uttech) Odenbrett. After John joined his sisters, Lucille and Anne, his sister Shirley, and brother Gary completed the family. His family eventually moved from Minnesota to California in 1952 when John was around 11 years old. He had many fond memories of his Minnesota and California childhood, and reminisced often. Lucy says he must have had the most wonderful childhood imaginable, from all the memories he shared. His father had a polka band, so the family regularly attended festivals and dances. He loved polka music! John served with the Army Combat Engineers in Viet Nam from 1966 to 1968. He earned two Bronze Service Stars and Expert Rifleman. He even arranged a Christmas show for about 500 GI's while serving in Viet Nam. John worked many jobs over his lifetime and gained enough experience to the point where he could do almost anything. He commented that he was never out of work, even when people said there weren't any jobs available. He was an over-the-road trucker for many years, from which he retired. This was a job that took him to every state in the US, except Hawaii. John beautifully played the piano, organ, and accordion by ear. Sometimes he would say, "I play by ear, but usually use my fingers." He loved to laugh and loved jokes; he had a million of them. No matter the subject or situation, there was a joke to fit it. He also loved good food, trains, clocks, funny movies, animals - particularly dogs, horses, and birds. He spent hundreds of dollars on bird seed. He liked to cook, especially breakfasts. And back in the day, he liked to sing bass in the church choir. He was a member of the NRA and enjoyed going to gun shows. He was an avid knife collector, and loved the look and feel of a well-made knife. He also loved to be dressed comfortably. When Lucy asked what clothes he wanted to be buried in, he said, "Just be sure it's COMFORTABLE." He detested any lack of respect for our country or our flag, because he saw young men die for the values they represent. John said the best thing he ever did was clean the snow off Lucy Snyder's car after a New Year's Eve party, ringing in 1985 at their church. After that, they talked on the phone a few times, then she invited him to a lasagna dinner at her house. He always said her lasagna was better than any other. That was the beginning of a 36-year relationship. He was always grateful for the acceptance he had from Lucy's children and extended family. Lucy survives him, as does her daughter, Cheryl (Daryl) Olsen, and grandchildren Kiersten (Elijah) Cable, and Nate (Emily) Olsen, who call him "Papa John." He was also very close to Ronna (Rob) Stiefvater, Lucy's daughter who passed away in 2012. John is also survived by his sisters Lucille (Bob) Jones, Anne (Alan) Hardin, Shirley (Milan) Gonas, and sister-in-law Pat (Gary) Odenbrett, along with many nephews and nieces. He was preceded in death by his parents, and by his brother Gary, who passed away in 2019. In lieu of flowers, please donate to Sangre de Christo Hospice and Palliative Care (www.sangre.org). Service will be livestreamed on Facebook @RoselawnPueblo, Tuesday, March 2, 2021 10:00am.

John "Jack" Robert Odenbrett passed from this life into the presence of a loving God on Saturday, February 20, 2021 in Pueblo, Colorado at Sangre de Christo Hospice House, with his sweetheart Lucy and her daughter at his side. John was born... View Obituary & Service Information

The family of John " Jack" Robert Odenbrett created this Life Tributes page to make it easy to share your memories.

John &quot;Jack&quot; Robert Odenbrett passed from this life into the presence...

Send flowers to the Odenbrett family.