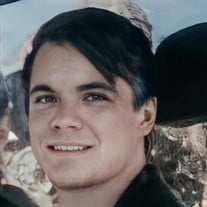 John Robert "JR" Mauro, 26, of Pueblo, Colo., born Sept. 27, 1994, was called away peacefully on June 15, 2021. He was preceded in death by his grandmother, Geraldine Kay "Goody" Mauro; uncle, Robert Allen Wright II; and cousin, Nicholas Adam Mauro. John is survived by his mother, Mischa Lee Jargowsky; father, Walter John Mauro Jr. (Catherine Louise Cisneros); stepfather, Jack Robert Jargowsky; grandparents, Robert Allen "Granddaddy" and Wilda Charlene "Weeda" Wright and Walter John "Papa" Mauro Sr.; sisters, Rosalyn Nicole Byrd and Maranda Marie Gabriel Mauro; brother, Walter Johnathan (Daria "Dasha") Mauro; aunt, Cynthia Marie Mauro; uncles, Ashley Porter (Lisa) Wright and Larry Earl Hollenbeck; niece, Veta Lee Hollenbeck; nephews, Diego David Cordova and Walter Jack Mauro; cousins, Lisha Marie (Chris) Williams and son, Alex Baker, Morgan Leah Deal, Porter Mason, Addi Grace Wright and Nicole Vicky Mauro. John grew up loving sports. He began his childhood with community sports such as basketball, baseball, soccer and later, played football in school where he made lasting friendships. John loved video games and TV shows. He treasured introducing his family to new TV shows and would stay up for hours with his siblings and parents watching a show he knew they would each specifically love. John was classy. He was fascinated with the finer things in life, watches (his Rolexs), sports cars, firearms and traveling. John thrived for cars. Cars were John's passion and boy, did he love them fast. John "The Drift King" loved to race as fast as he could in any car he could get his hands on. John had seen the world. He traveled 40 states and 23 countries throughout his life. John was brilliant in business and math. He had an associate degree in business/accounting and was actively pursuing his bachelor's degree in business/finance. John was an entrepreneur. John had a mind of his own, with dreams and ideas that were as big as his heart. John had a deep passion for the homeless and less fortunate community. He strived each day to provide food and shelter for them. John's goal in life was to improve a broken system. John's dream was to help anyone less fortunate than himself. John had a heart of gold and planned to open a center to help the lost and hopeless. While perusing his dreams, John was a successful pawn broker at Top Dollar Pawn and provided invaluable insight into day-to-day operations. John was loved intensely by all who knew him. John was a protective, loving, thoughtful brother, son and friend. John made a lifelong impact on this world and the hearts he touched that will never be forgotten. Viewing, 9 a.m., followed by funeral service at 10 a.m. Tuesday, June 22, 2021, at Praise Assembly of God. Online condolences may be made at www.roselawnpueblo.org. Love you "doggie."

The family of John Robert Mauro created this Life Tributes page to make it easy to share your memories.

Send flowers to the Mauro family.