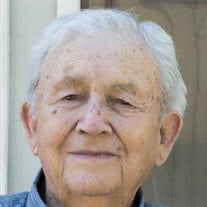 John D. Marquez, 90, was born December 23rd, 1927 in Los Sauces CO. John passed away peacefully on April 30th, 2018. Proceeded in death by: Parents, Juan DeJesus Marquez and Maria Eulalia Marquez; brothers, Joe, Max, Mike; sisters, Rita, Annie, Cora; grandsons, Michael James Hernandez and Robert William Marquez. Survived by his beautiful wife of 65 years Georgiana Marquez; children, John W. Marquez (Theresa), Evelyn (James) Hernandez, Elizabeth (Frederico) Posada, Robert (Janette) Marquez, Virginia Marquez, Tom (Rita) Marquez, Rosalie (Bill) Marquez; sister, Carmen Chavez; 12 grandchildren; and 8 great grandchildren; and a very large extended family. John was known as the gentle giant, the peaceful man, the teller of tales and the provider. John was most proud of his family and felt the luckiest day of his life was when the love of his life said,” I do”. John was most adept at telling a tall tale with such sincerity you would believe every word. His humor was subtle but most effective and much laughter could be had once he started telling jokes. John’s sense of humor was never at someone’s expense as he always laughed with, never at others. John and Georgiana gave of their time to volunteer with Girl Scouts of America, El Pueblo Museum, SRDA and many more places. His sense of being part of the community and giving back was instilled in his children. John worked hard at the Pueblo Army Depot, and to ensure his family was well fed he also moonlighted at barbering. Once he retired from the P.A.D. he was able to open up John’s Barber Shop where he worked side by side with his beautiful wife, Georgiana. So many of the customers became family to him and he looked forward to them coming in to visit. John was an avid gardener and his flowers were admired by so many in the neighborhood. John was a long-standing member of Christ the King Parish. John proudly served in the Army-Air Corp from Feb 1946 to Aug. of 1947. He often spoke of the journey from the small town of Los Sauces to Hawaii. In lieu of food and flowers memorial contributions may be made in John's memory to the American Heart Association. Viewing will be held from 4-6pm, Friday, May 4th, 2018 at Roselawn Funeral Home. Funeral Service will be at 2pm at Roselawn Funeral Home Chapel with interment to follow at Roselawn Cemetery. Online condolences can be made at roselawnpueblo.org.

The family of John D. Marquez created this Life Tributes page to make it easy to share your memories.

Send flowers to the Marquez family.