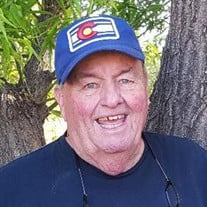 John Thomas Lane passed away peacefully on February 6, 2018. Waiting for him in heaven was his parents, William and Beatrice Lane; and his in-laws, Pete and Mary Maurello; brothers, Bill, Jim, Bob, and Charles Lane; sisters, Margaret Cipriani and Theresa Aronson. He leaves behind his loving wife and soulmate of 58 years, Margie; his four children, in which he was proud to call “Good Citizens”. John (Kathy) Lane, Joe (Wendi) Lane, Lisa (Bruce) Runyan, and Kate (Mike) Runyan. He was blessed with six grandchildren, which were the apples of his eyes. Nicole, John, Lexie, and Madison Lane; and Jeff and Emily Runyan. Survived by his special sister and brother in laws, Tony and Joan Venuto, Carl (Angelica) Aronson. He has also left behind numerous nieces, nephews, and special friends. John was born February 12, 1939 and was a proud Pueblo resident for his entire life. He graduated from Pueblo Catholic High School in 1957 where he was an outstanding football player. He had several football scholarship options, but choose to attend Marquette University to pursue a degree in Mechanical Engineering. Right before his senior year at Marquette he married Margie, the woman that he would continue to chase for 58 years. He began his career at CF&I and worked in various management positions throughout the mill. With the closure of CF&I, he ultimately was given the opportunity to become one of Trane Corporations first employees as they expanded to Pueblo. He worked at Trane until his retirement. He had the pleasure of serving his community on the School District 70 School Board and the Knights of Columbus. He currently was an active member of the VEBA Board, Pueblo Sanitation Board, and the Pueblo Railway Model Railroading Association. Our Dad had an infectious smile and opened his arms, heart, and home to friends and strangers’a like. He was passionate and became an expert on Railroads in Colorado. He was an avid model railroader and had an extensive layout which he designed. He was also a Bronco’s fan and a proud conservative. He loved his country and was extremely patriotic. Dad was an avid fly fisherman and one of his greatest joys was his yearly trips to Marble, Colorado with the Marble Gang. He was the most loving husband, dad, and grandfather and the pain in our hearts will be there until we meet him again in heaven. Rest in peace our “Chief” and know you were loved more than words could ever say. Memorial Mass will be 10:00am, Monday, February 12, 2018 at St. Joseph Church. Inurnment to follow at Roselawn Cemetery.

The family of John Thomas Lane created this Life Tributes page to make it easy to share your memories.

Send flowers to the Lane family.