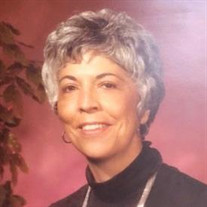 Joan F. Vialpando, 92 of Pueblo passed away Nov 4, 2019. Preceded in death by her parents, Marcus I and Rose Cordova Vialpando; brothers, Marcus T. Vialpando, Arthur B. Vialpando, and Charles T. Vialpando; and sister, Josephine Vialpnado. Survive by her brother, J. George (Mary Ellen) Vialpando; as well as numerous nieces and nephews. Joan Frances Vialpando was born on August 21, 1927 in Trinidad, Colorado. Her parents were Marcus Vialpando and Rose Cordova Vialpando. Marcus was the manager of CF&I company store in Tencio, Colorado at the time She grew up in Tencio and went to school in Primero. Upon graduation she attended and graduated from Loretto Heights College in Denver, Colorado. The degree she earned was a bachelor’s in liberal arts with an emphasis in secretarial skills. She worked in Denver then moved to Pueblo in 1949 to help her mother care for her younger siblings. Joan secured a job with the secretarial pool at CF&I in 1949. She worked as a secretary for various department heads. Quality Control, Accounting, and Purchasing. She eventually found her calling in the Industrial Engineering department. Joan always had a gift for math. Her talent was recognized quickly, and in the mid 70’s when women were just beginning to be seen as equals in fields like engineering, she was promoted to the title of Junio Industrial Engineer. Her job duties were to gather and interpret data from all departments of the CF&I steel mill from the Open Hearth to the Rail Mill and make recommendations on streamlining and purchasing. Joan’s service for CF&I was from 1949-1982 when the mill went through the series of massive layoffs and restructuring. The two achievements that bring her the most joy are her 30 years of employment bracelet an being a female pioneer in a male dominated field. She retired from the mill in June of 1982. Recitation of the Rosary will be 6:00pm, Thur, Nov 14, 2019. Funeral Mass will be 11:00am, Fri, Nov 15, 2019 both at Holy Family Parish.

The family of Joan F. Vialpando created this Life Tributes page to make it easy to share your memories.

Send flowers to the Vialpando family.