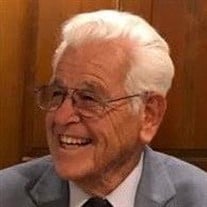 Jim Smith (89) A truly beautiful soul, born Edward James Smith to Edward J. Smith and Margaret Boyer Smith on April 7, 1929 in Hayes, KA. and died October 19, 2018 in Pueblo, CO. with his family and many dear friends at his side. Jim lived an incredibly blessed life. He LOVED sports and excelled in football which earned him a scholarship to Notre Dame. Upon graduation, he landed his first coaching job for the freshman football team at Notre Dame. It was then that the U.S. Marine corps came calling and he served as a platoon leader in Recon Co., 1st Marine Division during the Korean War, 1952-1954. At the completion of the Korean War, Jim came back home and resumed his life as a football coach at both the high school and Collegiate level to include coaching the Buffalos at Colorado University. It was at that time he married his first love Francis Carol Johnson and together they had 5 children; Tanji Dee, Holly Lee, James Kully, Karla Joy and Shawn (Bo) Dean. Jim went on to achieve a Doctorate Of Education and became the Dean of Men at the University of New Mexico. He finished his career at Plymouth State College in New Hampshire where he was Dean of Student Affairs for sixteen amazing and heart fulfilling years. After retiring, Jim remarried Judy Smith of Pueblo CO, which expanded his family, gaining five more beautiful children; Dan, Gary, Deana, Margaret and Jeanie. His later years were spent traveling joyfully around the world with Judy. In addition, Jim’s lifelong faith in God and Jesus guided his devote dedication and support to numerous Catholic ministries along with countless other charities including; Dream Weavers, Colorado Boys ranch, El Pueblo Boys and Girls Ranch, Meals on Wheels, One World One Heart Foundation as well as sponsoring numerous children around the globe. Jim’s love of God, love of family and love of service to his fellow neighbors were his unwavering priorities throughout his life. In the end, Jim’s final prayer was that he could join St. Paul in the justifiable claim that he had “run the good race!” He is survived by his five children; Tanji Smith Samson and her husband Gerry, Holly Lee Smith, James Kully Smith and his wife Karen, Karla Joy Smith Demers, Shawn (Bo) Dean Smith and his wife Pamela. 3 stepchildren; Dan Smith, Jeannie Baxter and her husband Doug, Margaret McCrea and her husband Dan 15 grandchildren; Jake Turner and his wife Amanda, Krystal Kelly Smith and her fiance Eric, Kyle James Smith, Anaystaysia Caprice Smith, Autumn Cheyenne Smith, Amber Clarice Smith, Arthur (AJ) Braach, Cierra Levine and her husband Barry, Lindsay Taye Oligny and her husband Dustin, Tawny Pierce and her husband Corey, Tara Jean (TJ) Baxter and her husband Derek Price, Kama Shae Smith, Geramya Joseph Smith, Hailey Jean Smith, April McCrea and 11 great grandchildren. In Lieu of flowers, donations can be made to ‘Catholic Charities of the Diocese of Pueblo’ Come celebrate his life!

Jim Smith (89) A truly beautiful soul, born Edward James Smith to Edward J. Smith and Margaret Boyer Smith on April 7, 1929 in Hayes, KA. and died October 19, 2018 in Pueblo, CO. with his family and many dear friends at his side. Jim lived... View Obituary & Service Information

The family of Jim Smith created this Life Tributes page to make it easy to share your memories.

Send flowers to the Smith family.