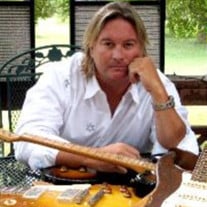 On Friday, July 3, 2020, Jeffrey Charles Van Zandt, AKA JVZ, passed away due to injuries sustained in an auto accident on Ohio Pass between Crested Butte and Gunnison, Colorado. Jeff was born on July 23, 1967, in Pueblo, Colorado and moved as a toddler to Southern California. He attended Newport Elementary School, often sneaking opportunities to surf its backyard only to return with the obvious giveaway of a nose drip. Ensign Middle School and Newport Harbor High were also honored to have him walk their halls. Southern California would forever remain his true north, but music and culture called him to Austin, TX in his early twenties where he much later met and married his wife, Alexandra. The Gunnison Valley was a part of his life from early on as he frequently spent summers traveling to the Valley with his family. Many memories were made at the Jennings Ranch and fishing on the Blue Mesa and Taylor and Gunnison Rivers. After introducing the valley to his wife, they made the decision to move and began the arduous process of finding just the right property. They closed on this property at the end of June and had just made the first round of moves from Austin to Gunnison. Jeff spent one night in the home he worked tirelessly to obtain. Jeff had lived 8 lifetimes when he passed and squeezed every second from every day. Never one for the “rocking chair,” Jeff constantly pushed himself to set goals and accomplish them his way, guided by the question, “What are we going to do with all this future?” Being of the ocean, Jeff held numerous jobs in Newport Beach that provided him access to the environment that fed his soul. The first of which was stocking shelves at a convenience store for the singular purpose of saving to purchase a wetsuit. From there he held many positions including: owner/operator of Newport Boat Works, a private yacht management company, dockmaster at the Balboa Yacht club, and yacht management, charters, and deliveries of numerous privately owned vessels (including: Lovely Lady, Catalina Express, Dear Leap, Dorsal, Roxanne, Explorer, Rhapsody, and Swirl) as a Mate, First Mate, and Captain. Having been born with music and grit in his blood, he nunchucked his way into the “real” scene as a guitar player in various bands and worked with and toured world-wide with industry giants as a production manager, tour manager, stage manager, and guitar tech. After being sought after for specialized jobs requiring his prowess, Fender Musical Instruments, Inc. hired him to design, build and manage their new showroom in Austin, Texas. In his role as Artist Relations Manager for Fender, JVZ worked hand in hand with some of the most iconic artists in the history of Rock-n-Roll. Jeff preferred authentic music emanating from humans and appreciated the individual talent. He was never a fan of the computerized product commercially created by the “Machine” meant to baffle the masses and gain profit. He was interested in the gut punch, greasy stink, tone, and genuine art. A visionary and creative genius, JVZ orchestrated productions that captivated the audience on all levels of their senses, while honoring the artistic talent performing. Leaving no stone unturned, he would often be seen emptying trash cans between sets and setting gear to within a millimeter of a diagramed position because, “It’s what you do and you do it all.” In 2010 he created and directed SUP Jam Austin, a stand-up paddle board race event and expo, the first in Austin, Texas. A second event occurred the following year. Having built a solid name for himself and respect in the production world for ingenuity and ethics, numerous organizations called on him for his input for events including: Nike Human Race, Austin Marathon, Ameripolitan Music Awards, and ALL ATX. Following their ocean side marriage, Jeff, Alex and their loved ones witnessed a pod of dolphins and sea lions swim by. This marked the beginning of their remarkable relationship between the love of nature and each other. Considering nature a teacher, place to wander, lose, and find oneself, they spent much of their precious free time in California, Colorado, Hawaii, and Mexico. Last summer they launched “Gunny Gal,” independence building adventure trips for young adults with exceptionalities which enabled them to merge his production/music background, Alex’s special education background, and their infinite admiration of nature. Jeff loved, championed, and challenged a population of individuals often put in the periphery and was a huge advocate for inclusion. Jeff was preceded in death by his paternal grandparents, Chuck and Norma Charles and maternal grandparents, Carl and Celia James, and uncle Carl James. He is survived by his wife, Alexandra, parents Carol and Owen McKinney, father Emery Van Zandt, in-laws Dr. Fred and Sandra Freeman and Dr. Albion Norman, brother Jason and niece Sophia Van Zandt, half-brother Ryan Van Zandt, uncle David James, aunt Pat James, aunt and uncle Marilee and Richard Roldan, uncle and aunt Jamie and Beth McKinney, cousins Dave (Wendy), Darren (Stephanie), Kyle, Kari, Ian, and Rick, as well as his extended family and numerous beloved friends he considered family from CA, CO, TX, OR, TN, FL, NY, and NC. The family wishes to extend its heartfelt gratitude to the Gunnison community for embracing Alex with kindness and support. She and Jeff were excited to begin their next chapter in this place filled with wild beauty, the promise of adventure, and friends. Although he has moved on, his presence remains as does their commitment to the community and Valley going forward. On his death certificate, his profession reads, “Ambassador of Vibe.” That he was!

On Friday, July 3, 2020, Jeffrey Charles Van Zandt, AKA JVZ, passed away due to injuries sustained in an auto accident on Ohio Pass between Crested Butte and Gunnison, Colorado. Jeff was born on July 23, 1967, in Pueblo, Colorado and moved as... View Obituary & Service Information

The family of Jeffrey Charles "JVZ" Van Zandt created this Life Tributes page to make it easy to share your memories.