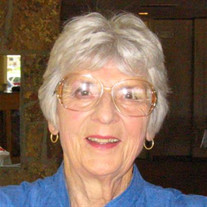 Ione Miller was born on July 5, 1929 in Pipestone, Minnesota to parents, John and Grace Jacobson. Ione passed away in Pueblo, Colorado on November 3, 2016. In the 87 years of her life, Ione worked an amazing number of jobs. As a child, she and her brother sold garden vegetables to neighbors. She went on to work in her parents’ grocery store, at the local phone company, and later for Bendix Industries in Kansas City. She met Jack R. Miller in Peculiar, Missouri on a blind date. They married on September 10, 1950. Upon returning from their honeymoon, Jack received orders for a second tour in Korea. He returned home the same day their daughter Kathy was born in Pipestone. Two more children, Kris and Marty were born in Missouri. In 1962, the family moved to Pueblo, Colorado. Ione enrolled in SCSC to become a teacher. She taught in District 70, and later earned her M.A. at Western State, after which Ione served as principal at Pueblo West Elementary. In retirement, Ione was active in Friends of the Library and Pueblo Historical Society, serving as president of both. She wrote numerous articles for Lore Magazine, and co-authored Pueblo: an Illustrated History. Ione was an avid reader and historian, but the center of her life was her family. Ione was pre-deceased by husband Jack in 2004. Also parents John and Grace; brother, Dale Jacobson; sister, Leah Hurd; and grandson, Max Zacharias. She is survived by daughters, Kathy Merrill, Kris Allen; and son, Marty Miller; as well as grandchildren, Katy Allen, Kelly Smagur, Ross Allen, Garrett Zacharias, Cole Merrill and Alex Merrill. Ione is also survived by five great-grandchildren; her brother, Buck Jacobson; and sister, Edna Nelson. Family and friends will gather at a later date to celebrate Ione’s life. In lieu of flowers memorial donations may be made to the Pueblo Historical Society

Ione Miller was born on July 5, 1929 in Pipestone, Minnesota to parents, John and Grace Jacobson. Ione passed away in Pueblo, Colorado on November 3, 2016. In the 87 years of her life, Ione worked an amazing number of jobs. As a child, she... View Obituary & Service Information

The family of Ione A Miller created this Life Tributes page to make it easy to share your memories.

Send flowers to the Miller family.