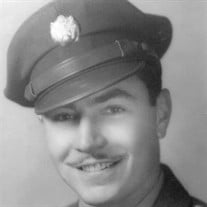 Hugh Chesi (Hugo Chiesi) Hugh passed away peacefully at Villa Pueblo Care Facility on November 2, 2019. A resident there since 2011, Hugh loved the staff, enjoyed his “home” there, developed close friendships with residents, and participated in many activities. He is preceded in death by his parents, Victor and Jeanie (Bosco) Chiesi, brother Gene Chiesi, and sister Eleanor (Chiesi) Spock. He was also preceded in death by his wife, Christine (Yourick) Chesi (1992), and his daughter, Christine (Chiesi) Arelleno (2018). He is survived and will forever be remembered with love by his daughter Deborah (Chiesi) Hokanson. He is also survived by his sons-in-law Jay Hokanson and Cippy Arellano, as well nephews and nieces and their families, and his grandchildren, step-grandchildren, and great-grandchildren, all of whom he treasured. Hugh was born Hugo Andreno Chiesi in Walsenburg, Colorado in 1923. In the late 1960’s he legally changed his name to Hugh A. Chesi due to pressure from others who experienced difficulty pronouncing his name. Hugh had a gentle, encouraging spirit and was extremely charismatic. He genuinely liked and respected everyone he met, and he was well-liked by everyone who knew him. He considered his family to be the most important part of his life and was devoted to his wife and daughters. He enjoyed the simple things in life, and some of his fondest memories were of helping his father grow and sell vegetables from their gardens, family picnics and trips, and enjoying the “best wine in the world” (as Hugh described it), which his father made. Of all his many accomplishments, he was most proud of his years spent in the US Army Air Force during WWII. As a Staff Sergeant with the 34th Bomb Group, Hugh was stationed in Mendlesham, England. Hugh was a flight engineer and top-turret gunner on the aircraft he referred to as the “noble warrior”, the B-17 Flying Fortress. He and his crew gave their B-17 the moniker Mizpah. Prior to his enlistment in the Service, Hugh worked as a steel worker (Open Hearth) at the CF&I in Pueblo. Hugh married Christine Yourick in Walsenburg, Colorado in 1946. He adored, and was devoted to, Christine throughout their 46 year marriage and lovingly cared for her through the many illnesses she suffered throughout her life. They lived in Walsenburg during the early years of their marriage until moving to New Mexico in the 1950’s. Hugh and his family lived in New Mexico until the mid-1960’s and have always felt a strong connection with the Southwest. Hugh’s work in wholesale food sales with the Morey Mercantile Company took him throughout central and northern New Mexico and to Window Rock, Arizona. Hugh particularly enjoyed meeting and spending time with the Native American people at the many Native American Pueblos he visited on his route. He later worked in sales with Metropolitan Life Insurance Company, then as a District Manager for the John Hancock Mutual Life Insurance Company in the Santa Fe/Albuquerque area. He also did part-time work in maintenance at the School for the Deaf in Santa Fe. While in New Mexico, he did some work as an extra on the TV Series Empire, which aired from late 1962 to December 1963, and as an extra in several Westerns filmed near Santa Fe. Additionally, he served with the US Air Force Reserves from 1954-1960, stationed at White Sands, New Mexico. When the family moved to Pueblo in the mid-1960’s he worked in sales for several car dealerships. Hugh had a zesty appreciation for automobiles and particularly enjoyed his time working with Jess Hunter Ford. He was a bit of a renaissance man and led a colorful life. In his retirement years, he pursued several eccentric adventures, including attending the Pueblo Police Academy when he was 71 years old in 1993, running for Sheriff in the mid 1990’s, and pursuing a short-lived run for Governor in 1998. An avid writer, he kept Puebloans entertained with his numerous Letters (on a myriad of subjects) to the Editor of the Pueblo Chieftain. A private memorial service will be held in December. Hugh’s family is extremely grateful to the staff of Villa Pueblo for their attentive and compassionate care during his 8+ years there, and to the staff at Sangre de Cristo Hospice for ensuring that his last days were peaceful and comfortable. Additionally, Hugh’s daughter expresses special thanks to Jay Hokanson, for his kindness and assistance to Hugh, especially on the special trips they took to Arizona and New Mexico, and other outings, which Hugh always enjoyed; and thanks Cippy Arellano, for his visits to Hugh at Villa Pueblo each week. Cippy always brought Hugh his favorite treats and spent quality time with Hugh. Hugh really enjoyed seeing Cippy, and looked forward to their weekly visits. In lieu of flowers or other gifts, the family requests that donations be made in Hugh’s name to the Villa Pueblo Pavilliion Residents’ Activity Fund, or to Sangre de Cristo Hospice.

The family of Hugh A. Chesi created this Life Tributes page to make it easy to share your memories.

Send flowers to the Chesi family.