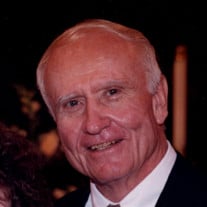 Henry “Hank J. Germ, 86 of Pueblo passed away on Aug 23, 2018. He is survived by his loving and devoted wife of 63 years, Dawn B. Germ; daughter, Darla (Paul) Beauchaine, of Pueblo West, CO, and Cindy Germ, of Los Angeles, CA; nephew, Dan Crawford; nieces, Shawn (Larry) Harris, Lisa (John) Chittenden, and Susan (Kathy) Crawford; also numerous cousins and great nieces and nephews. He was born May 1st, 1932 in Pueblo CO to the union of Margaret Perko Germ and Joseph Germ. He was preceded in death by his parents; sister, Bette Germ Crawford; and brother in law, Dick Crawford; mother and father in law, Charlotte and Roger Jensen. Hank graduated from Pueblo Catholic High School in 1949. Played baseball with Pueblo Catholic High Shamrocks in 1948, American Legion State Championship Baseball Tournament in 1949 as a short stop, member of the South Avondale Cardinals, the 1952 champions of the Pueblo Semi pro baseball league. With the B-Jays he received his first starting shot as pitcher. He loved the outdoors, hunting, shooting target practice, reading, bowling, and most importantly baseball. He never met a stranger. He enjoyed talking with everyone he met and finding out about where they were from and their lives. Henry was a devoted Catholic and a member of Holy Family Church. He retired from CF&I Steel Mill as a crane man in 1986 after 30 years of service. Henry was a devoted and loving son, husband, father, and friend. He always put his family first. He loved to joke around and his laugh and humor was contagious. His heart was kind and gentle and his sprit was as playful as a child. We wish to thank Life Care Center of Pueblo for their excellent care of Henry “Hank” Germ for the past 3 years and a special thank you to Dr. Thomas Gaide and his nurse Rachel Perricone. Visitation will be 5:00pm with Recitation of the Rosary at 6:00pm, Tuesday, August 28, 2018 at Roselawn Funeral Home. Mass of the Resurrection will be 10:00am, Wednesday, August 29, 2018 at St. Mary’s Church. Cremation to follow mass. Inurnment will be 11:00am, Thursday, August 30, 2018 at Roselawn Cemetery. Online condolences can be made at roselawnpueblo.org.

The family of Henry "Hank" J. Germ created this Life Tributes page to make it easy to share your memories.

Send flowers to the Germ family.