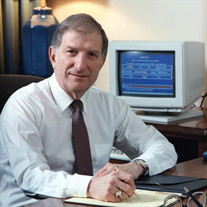 Henry Gregory Anzuini, age 90, of Pueblo, Colorado, passed away on April 27, 2021 after a battle with pneumonia. Henry was born on October 19, 1930 to Vincent and Lena Anzuini in Stubenville, Ohio. He grew up in a loving family with modest means, loved football and played pick up games on the streets of Stubenville with a milk carton wrapped up in tape and rubber bands as the ball. After graduating from Stubenville High School, He went on to study Engineering at The Ohio State University and was very proud to be the first kid in the neighborhood to graduate from college. Henry first met his future wife, Barbara Renard, on a blind date set up by his college roommate. He turned on his Italian charm and the relationship quickly became serious. It sounds like it was love at first site. They have been married for 67 years. After graduation, he enlisted in the US Army, following his tour in the Army he landed his first job as a Mechanical Engineer for Mosiac Tile in Zanesville, Ohio for several years. Henry and Barbara’s were married in 1953, their first child, Gary born in 1955, a couple years later a sister Karen came along to complete the family. Henry was a force of nature, determined to provide for his family opportunities he did not have as a child growing up in steel town on the Ohio River. His family meant more to him than anything else in the world, something he often mentioned. He was unendingly proud of his children Gary and Karen and always tried his best to support them. Henry was an astute businessman and ended his working career as President of a Fortune 500 Corporation. Anyone who knew Henry knew that he was the most loving father and husband a family could ask for, and his razor sharp wit stayed with him to the end. Henry was predeceased by his father, Vincent, his mother, Lena; and his brother, Robert Anzuini. He is survived by his wife, Barbara; his son Gary; his daughter, Karen; daughter-in-law, Ida; three step-grandchildren, Sean, Seastian and Leandra; not to mention his twelve great-grandchildren. The family requests that all flowers and notes are sent to Roselawn Funeral Home. A Celebration of Life will be held at 11:00am, Friday, May 7, 2021 at Roselawn Funeral Home Chapel.

Henry Gregory Anzuini, age 90, of Pueblo, Colorado, passed away on April 27, 2021 after a battle with pneumonia. Henry was born on October 19, 1930 to Vincent and Lena Anzuini in Stubenville, Ohio. He grew up in a loving family with modest means,... View Obituary & Service Information

The family of Henry Gregory Anzuini created this Life Tributes page to make it easy to share your memories.

Send flowers to the Anzuini family.