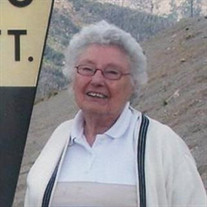 Georgia N. Swope. Born August 23, 1921 passed March 19, 2017. Survived by children, Ronald (Kathy) Swope, Doug (Mary) Swope, Robert (Roseanna) Swope, Cheryl Pucket, David (Arlene) Swope, and daughter-in-law Lidia Swope, as well as many grandchildren and great-grandchildren. Preceded in death by parents, Frank and Margaret Smith; sister, Norma Jean, son-in-law, Donald Pucket, son James Swope, beloved aunt, Mildred Beach, and her husband of 68 years, Kenneth Swope. Georgia grew up in Marshall, MO. Following high school graduation, Georgia married her sweetheart, Kenneth in 1939. They soon began their family with son James, before Kenneth began his service in the US Navy during WWII. After he was discharged, they moved west to Colorado and added four more sons and one daughter to the family. They bought an 11 acre farm and made their life on the St. Charles Mesa. As the family grew Georgia was very involved with the PTA, helping with the family farm which included irrigating and many years of service to Grace Community Church in visitation, AWANA and nursery ministries. She was a master crocheter, creating some beautiful works of art, still cherished by her family. She enjoyed working crossword puzzles, she loved Christian music and she was very involved with her children and grandchildren. She was a faithful companion and caregiver to her husband as his health began to fail. She will be remembered by her family as a prayer warrior and a friend to all.

The family of Georgia Nell Swope created this Life Tributes page to make it easy to share your memories.

Send flowers to the Swope family.