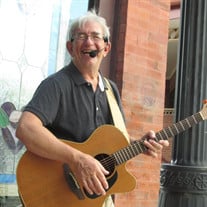 George Louis Golob March 25, 1950 – December 9, 2021 George Louis Golob, 71, went to be with the lord in the early morning of December 9th 2021. George was born and raised in Pueblo’s old “Bojon Town” born to Maxine Golob and Louis Golob, whom have also gone onto to be with the Good Lord. George is survived by his loving wife Lucille, daughter Marie and sons George and Nelson, whom he loved all very dearly in his own way. George was a hardworking man who worked primarily in retail manager positions to provide for his family, never complaining even when he worked long hours. Among his list of jobs was a night custodial position in Disneyland, which anyone who knew him, knew this was his favorite. George was an avid lover of all things Disney, especially that of his favorite character Donald Duck. “Aww Phooey” and “Uh oh, I’ll have some fun” were his most used lines and George did indeed have fun. He loved making music with his guitar, singing, songwriting and creating, it was truly his passion. He picked up guitar back in his younger high school years and honestly rarely put it down. In the recent years he would play at the river walk and local open mic nights. Performing and singing in front of an audience was something he really did to the very end, sometimes even over Zoom! George was someone who believed in the magic of life and the wonders of imagination. That even the simplest things could be extraordinary things; anything can happen. George was a simple man and when it came to death, he never wanted anything extravagant, not even a proper funeral. George wouldn’t have wanted to hurt any of his loved ones or friends with his passing. Whereas it is only natural to be sad, just as it is natural to die, what we mourn is the ending to the story of life that we witnessed before he died. See George believed that: all stories, even those we love, must eventually come to an end… and that ending is really just an opportunity for another story to begin. George would’ve wanted you to peacefully remember him, not requesting anyone to be happy with his passing, but to promise to turn the page and continue reading so that the next story can begin.

The family of George Louis Golob created this Life Tributes page to make it easy to share your memories.

Send flowers to the Golob family.