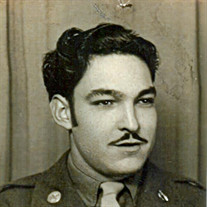 Gabriel “Gabe” M. Sanchez Sr. 92, formerly of Pueblo passed away in Florence, CO, December 4, 2015. He was born in Valmora, NM. Preceded in death by his wife, Jennie Sanchez; son Leonard Valdez; daughter Marie Valdez-Trujillo. Gabe is survived by his son, Gabriel M (Evelyn) Sanchez, Jr.; daughters, Christine (Ben) Ortega; Sylvia (David Brown) Sanchez; sister, Julia Romero; ten grandchildren; 25 great-grandchildren; and 32 great-great grandchildren. Gabe entered into the Army/Air Corps in March 1943. He served as Machine Gunner in the 71st Infantry Division in France, Germany and Austria. He earned a Bronze Star decoration for bravery during his service in WWII. He was selected in 2014 by So. Colo. Honor Flight to be flown to Washington DC to visit the WWII memorial. Gabe moved the family to Sidney Nebraska to work at Sidney Ordinance Depot. They remained there for 25 years until his transfer to Pueblo Army Depot. He retired from Civil Service as Ammunition Motor Pool supervisor with 32 years of service. Gabe loved to play the guitar and sing cowboy and Spanish songs with Jennie playing the violin by his side. They had many friends who would come by to have dance nights. Gabe always took the time to be there for others. His grandkids fondly remember him never being too busy to perform magic tricks or tell stories. He and Jennie were active members of Holy Family Church and lifelong members of the Legion of Mary where he was one of their rosary makers. Rosary will be 9:30 am Friday at St Mary’s Church and Funeral Service will follow the rosary at 10:00am. Interment with Ft Carson military honor to follow at Roselawn. Luncheon will be immediately after at St Mary’s Hall. In lieu of flowers, please consider a donation to Southern Colorado Honor Flight.

The family of Gabriel M. Sanchez created this Life Tributes page to make it easy to share your memories.