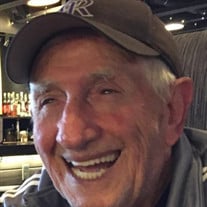 Edward J Simonich, 90, passed away on November 25, 2020 from Covid 19, after a short stay at Life Care Center of Pueblo. Edward was born on December 3, 1929 to John and Catherine (Buscia) Simonich, coming from Croatian and Slavic roots. Preceded in death by his parents; and four sisters, Matilda (Tillie) Hostetler, Helen Prijatel, Mary Willis and Elsie Griffith. He is survived by nephews, Paul Prijatel, Rick (Laura) Prijatel, William Prijatel, Harlan (Judy) Willis; nieces: Colleen (Danny) Foster, Sandra (Mike) Oreskey, Karen Willis, Julie Spezze and Susanne (Jeff) Denwalt. Children: Mary Beth Simonich, Michael Simonich; and one grandson, Jason Simonich; several great nieces, nephews, his care giver, Anne Williams, and many Friends. Ed grew up in the Bessemer area attending school at Minnequa and St. Francis Parish. He Graduated from Pueblo Catholic High School in 1948. Following graduation, he in listed in the Navy as a radioman and was also a backup deep-sea diver. His tour of duty was in the South Pacific and in 1953 was Honorable Discharged. He went on to follow in his father’s footstep working at the CF&I. He did not enjoy his work and only lasted three months. So, with the encouragement of his friends, he joined the Pueblo Police Department, where he worked for 12 years. In the early days he was on foot patrol working the “Central Corridor” which included the toughest parts of town, including the Union Avenue District, Mesa Junction and the 200 and 300 blocks of Santa Fe Avenue. In 1966 he left the Police Department to work at the Pueblo Army Depot, working on missile systems until 1978. Around that time, he started to devote his time to history and archaeology. He decided to get his certification in Avocation Archaeology and went on to work at the Kit Carson Home in Boggsville, the El Pueblo Trading post site and other archaeological digs. Besides literally digging into the past, Ed dug into the memories of the many people who were there, compiling over 350 oral histories that to this day is stored on tapes and is located at the Robert Hoag Rawlings Public Library’s Western Research Collection. Besides interviewing people, he wrote exclusively for the Pueblo Historical Society, was the past president of the Archaeology Society and has placed several of the historical downtown buildings on the National Registry of historical places. He had continued to do historical scrapbooks until he went into the nursing home in July. He loved his baseball (the Rockies) and Western films and TV. He was always happy to see you and had a wonder smile. In Lieu of flowers, please donate to the Pueblo Library or the Pueblo Historical Society. Because of Covid, there will not be any funeral services, Ed will be cremated and buried. A memorial service will be announced at a later date.

Edward J Simonich, 90, passed away on November 25, 2020 from Covid 19, after a short stay at Life Care Center of Pueblo. Edward was born on December 3, 1929 to John and Catherine (Buscia) Simonich, coming from Croatian and Slavic roots. Preceded... View Obituary & Service Information

The family of Edward J. Simonich created this Life Tributes page to make it easy to share your memories.

Send flowers to the Simonich family.