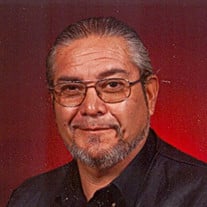 Edward R. Sanchez “Fuzzy”, 72, went to be with the Lord unexpectedly on May 25, 2015. He was born on April 27, 1943 in Walsenburg, CO. Proceeded in death by his mother, Stella Armijo and father, Ross Sanchez; as well as his in-laws. Ed is survived by his loving wife of 50 years, Kathy; his two sons, Kevin (Melissa), and Craig (Crystal). He also leaves behind three grandchildren: Jayven, Koby and Kaitlyn; two great grandchildren, Leanna and Maeya; sister, Kathy (Dan Suarez); two brothers, Richard and Michael; along with numerous nephews and nieces. Ed was a US Army veteran and had been employed at CF&I Steel Corp and NORAD. Ed had many hobbies including fishing and motorcycles. His number one “hobby” was his family and he would drop anything he was doing in order to help whoever needed it, especially his grandbabies. Ed was a member of Praise Assembly of God where he also enjoyed maintaining the grounds of the church. We are blessed to have learned so many life experiences with Ed. He was a kind, gentle and inspirational man; he was a mentor to many. His warmth, his heart, his love and presence will be greatly missed. Memorial Service will be held 10:00 am Wednesday, June 3, 2015 at Praise Assembly of God, 2000 Troy Avenue, Pueblo, CO 81001.

The family of Edward R Sanchez created this Life Tributes page to make it easy to share your memories.

Edward R. Sanchez “Fuzzy”, 72, went to be with the Lord unexpectedly...