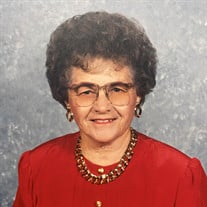 Edith Virginia (Bregar) Johnson of Avondale, Colorado passed away in her home on Sunday, August 15, 2021 at the age of 98. Edith was born November 3, 1922 in Avondale to Slovenian immigrant parents, Joseph and Mary Bregar. Born the fifth of six children, Edith spent her childhood with her three brothers and two sisters on their family farm. She attended Banner School across the street from her home until the eighth grade. While a student, young Edith worked as custodian in exchange for piano lessons given by one of her teachers. She often played at school programs. One of her favorite piano pieces was “Rock of Ages.” In 1941, she became engaged to Robert L. Johnson, also of Avondale. In February of that same year, Robert joined the Colorado National Guard, and after the start of World War II became a member of the U.S. Army. Robert and Edith married at St. Mary’s Catholic Church in the Grove on June 4, 1944 while Robert was home on military leave. While Robert was serving his country overseas, Edith contributed to the war effort by working in the Bolt Mill at C.F.&I. Steel Corporation. After the war, Robert and Edith remodeled and moved into a home on the Johnson Family Farm. Robert farmed in a business partnership with his father (Leslie) and grandfather (William) until the late 1950’s when he and Edith took over full operation of the 120-acre irrigated farm. The Johnson Farm was recognized in 2010 by the State of Colorado Historical Society, Colorado Department of Agriculture and the Colorado State Fair as a Centennial Farm. Over the years Edith worked tirelessly alongside Robert on the farm while maintaining their home. In addition to raising chickens and selling eggs, Edith could be seen riding the seed planter raising and lowering the markers and helping with the melon seed harvest. In the early days of their agricultural career, Edith would work alongside neighborhood farm women as they prepared and served meals for the men during the wheat harvest. They were blessed by the birth of two daughters, Judith Ann in 1945 and Victoria Leslie in 1950. Traditions were a big part of her childhood, and she continued these throughout her life, instilling a love of the Slovenian heritage in her children, grandchildren, and great grandchildren. She was known in the family and neighborhood as not only a proficient cook, but also for her Slovenian potica, pohanje, and impossibly thin home-made noodles. Starting in 1954, Edith became 4-H leader, a community service role she held for many years guiding and teaching young people in cooking. For a number of years, she served as chairwoman of the county 4-H Talent Show. Her contributions were recognized in 1999 when she was inducted into the Pueblo County 4-H Leaders Hall of Fame. Edith also served as a pantry and baked goods judge at area Colorado County Fairs and the Colorado State Fair. Edith is pre-deceased by her husband Robert; daughter, Vicky Johnson-Arthur; and son-in-law, Jan Arthur. She is survived by her daughter, Judy (Doug) Chambers of Austin, TX; grandchildren, Spencer (Meredith) Chambers of Pearland, TX, Jennifer Chambers of Austin, TX, Stacey (Jacob) Pearson, of Austin, TX, and Laurel (Scott) Hardy of Florida; great-grandsons, Phillip and Braden Chambers, and Jack and Clive Pearson; and many nieces, nephews, and their families. The family extends its gratitude to Frontier Hospice with special thanks for the exceptional care provided by staff members Megan, Melanie, and Darlene. A thanks also to Edith’s niece Mary Howery for her loving commitment and help to Edith in recent years. In lieu of flowers, the family requests donations in Edith’s honor to Avondale United Methodist Church, Pueblo County 4-H Foundation, or the Avondale Veterans Park (c/o Joyce Holmes 719-947-3486). A Graveside Service will be held at 10:00am, Friday, August 20, 2021 at Roselawn Cemetery. Masks are appreciated. Online condolences can be made at roselawnpueblo.org

Edith Virginia (Bregar) Johnson of Avondale, Colorado passed away in her home on Sunday, August 15, 2021 at the age of 98. Edith was born November 3, 1922 in Avondale to Slovenian immigrant parents, Joseph and Mary Bregar. Born the fifth of... View Obituary & Service Information

The family of Edith Virginia Johnson created this Life Tributes page to make it easy to share your memories.

Send flowers to the Johnson family.