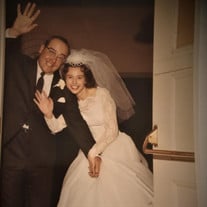 Not sure what to send?

Our parents Donald (89) and Dorothy Pisarczyk (86) went to be with our Lord on January 12, 2022, and January 14, 2022, respectively. They are preceded in death by their parents (Walter & Verna Pisarczyk and Anton & Louise Kuretich), their brothers (Walter V. Pisarczyk & Anton M. Kuretich) and their dear friends (Larry & Joanie Kosmas and Fred Toller). Don & Dorothy are survived by their children Walter (Jackie) Pisarczyk of Pueblo and Verna (Dave) Toller of Colorado Springs; their grandchildren Matthew Pisarczyk of Pueblo; Sarah (Garrett) Fritz of Andreas, PA; Jacob, Jordan & James Toller of Colorado Springs; and Dorothy’s sisters - Mary Ellis of Canon City & Elizabeth (Michael) Rhodes of Pueblo; sister-in-law, Rene Kuretich as well as numerous nieces & nephews. Don graduated from Huerfano High School in 1951 then proudly served in the US Navy on the U.S.S. Frank E. Evans during the Korean War. After honorably serving our country from 1951-1954, Don attended Pueblo Junior College and obtained his Associates in Applied Science in drafting. He then followed in his father’s footsteps and became employed by the Denver & Rio Grande Western Railroad where he worked in the Bridge & Building Maintenance Division until he retired with a disability in 1987. Don enjoyed talking about his time on the U.S.S. Evans and was proud of being part of the crew that restored the D&RGW Depot in Durango, CO. Dorothy graduated from Pueblo Catholic High School in 1953. After graduation, she worked at a dress shop in downtown Pueblo before beginning her banking career at Pueblo Bank & Trust. In 1968, Dorothy left the bank world to become a stay-at-home mom where she proudly raised her two children for 12 years before returning to work at Centennial Bank in 1980 as a teller than CPSC operator until her retirement in 1989. Dorothy loved cooking big family dinners and having the family together whenever possible. She also had a great love of animals taking in strays that showed up in their yard occasionally. The last to arrive, Lady, was a skittish pup that quickly endeared herself to both Don & Dorothy and remained with them for the rest of their lives. Once retired together, Don & Dorothy enjoyed camping and fishing and traveling to the reunions for the U.S.S. Frank E. Evans Association. One reunion took them back to Portland, OR, where they enjoyed a visit with their dear friends, Larry & Joanie Kosmas. They also enjoyed spending holidays with Fred & Mary Toller – never being “in-laws”, but just simply family. They were most proud of their children and the families they raised. As the grandkids grew up, they both loved updating Verna & Walter on what each of their families were up to keeping the family close. With Don’s heart condition and disability limiting his ability to travel, both settled in to being at home where Dorothy loving took care of Don until they both departed this world. In lieu of flowers, the family asks that you considering making a donation in Don & Dorothy’s memory to either the U.S.S. Evans Association (2286 Morgan Rd., Carlsbad, CA 92008 - 760-521-4700); PAWS for Life (https://pawspueblo.org/donate/) 800 N. Pueblo Blvd, Pueblo, CO 81003 – 719-543-6464 or The Humane Society of the Pikes Peak Region (https://www.hsppr.org/donate/ 630 Abbot Lane, Colorado Springs, CO 80905 - 719.302.8798). A graveside service will be held on June 13, 2022, at 10 am at Roselawn Cemetery.

Our parents Donald (89) and Dorothy Pisarczyk (86) went to be with our Lord on January 12, 2022, and January 14, 2022, respectively. They are preceded in death by their parents (Walter & Verna Pisarczyk and Anton & Louise Kuretich), their brothers... View Obituary & Service Information

The family of Donald & Dorothy Pisarczyk created this Life Tributes page to make it easy to share your memories.