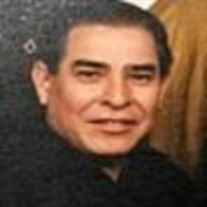 David J. Trujillo, born on October 8, 1944, in Crowly, Colorado, passed away peacefully in the comfort of his own home with his loving and caring wife by his side on November 11, 2021. Those who he left behind to miss him dearly is his wife of 59 years, Geraldine L. Trujillo; children, David (Concetta) Trujillo Jr., Isaias (Catherine) Trujillo, Gerard Trujillo, and Desiderio (Adria) Trujillo; grandchildren, Geraldine (Immanuel) Trujillo-Santistevan, David Trujillo III, Candace (Nick) Trujillo-Martinez, Mercedes (Jack) Trujillo, Gerard Trujillo Jr, Gerald Trujillo, Lacy (Michael) Trujillo, Van Trujillo, Charlee Trujillo, Desiderio Trujillo Jr, Hezekiah Trujillo; great-grandchildren, Celeste Santistevan, Cage, Kaydence, Kamden and Casden Martinez, Gerard A., Lyrica, Nyla and Isabella Trujillo, Xander Trujillo; and 2 great-grandchildren due in 2022. He also leaves behind his brother and best friend Andy (Ruth) Trujillo and an ex-daughter-in-law, Jennifer Sandoval who at the end of his beautiful road assisted with his care. Preceded in his death, his parents Isaias and Santanita Trujillo; in-laws, Ben and Estelle Apodaca; brothers, Fidel, Sam, Simon, Tony, and Elmer Trujillo; sisters, Minnie Gutierrez, Lillie Vigil, Mary Espinoza, Liz Valdez, Sally Vigil, and Prescilla Gallegos. Also preceded in his death, brothers-in-law Ron Trujillo, Gary and Ben Apodaca; and sister-in-law, DeeDee Apodaca. David worked 41 years and retired in 2004. He worked in Buena Vista for the pipeline, NORAD, Dana Corporation, the old Texaco Station on Lake & Summit in Pueblo, PAD and Midwest Steel. He enjoyed building his home, working on his cars, going camping, fishing, traveling, and family gatherings when his health was good. When his health started to decline, he enjoyed sitting and reminiscing about old times; the company of his pet; LouLou; and listening to stories about and looking at current pictures of his children, grandchildren and great-grandchildren. He lived a great and beautiful life and will be greatly missed. Graveside private service for immediate family only. A Memorial in his honor will be announced at a later date.

David J. Trujillo, born on October 8, 1944, in Crowly, Colorado, passed away peacefully in the comfort of his own home with his loving and caring wife by his side on November 11, 2021. Those who he left behind to miss him dearly is his wife... View Obituary & Service Information

The family of David J. Trujillo created this Life Tributes page to make it easy to share your memories.

Send flowers to the Trujillo family.